Crew members forgot to turn on a switch to maintain cabin pressure. The Jet Airways flight 9W 697 that took off from Mumbai had to take a U-turn and fly back to Mumbai when passengers started to get sick. 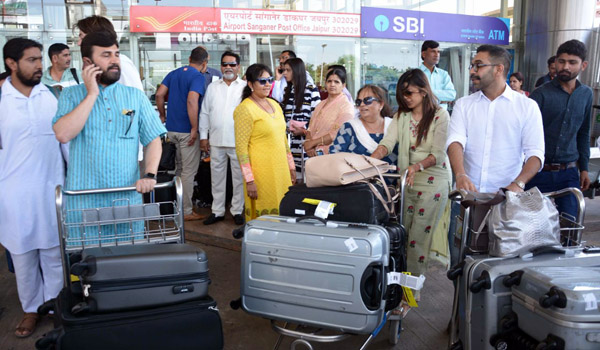 Passengers of Mumbai to Jaipur Jet airways flight coming out from Jaipur airport after the incident on Thursday.

Jaipur: Some passengers onboard a Mumbai-Jaipur Jet Airways flight started to bleed from their nose and ears due to the alleged negligence of crew members as the latter forgot to turn on a switch to maintain cabin pressure. The Jet Airways flight 9W 697 that took off from Mumbai had to take a U-turn and fly back to Mumbai when passengers started to get sick. The passengers later left for Jaipur in another flight.

Several passengers shared their story when they arrived at Jaipur. Some also took to Twitter and using hashtag ‘horror in the air’, they described the panic they had to suffer through. A passenger said, ‘After we took off the AC malfunctioned, then air pressure system malfunctioned too and oxygen masks came out. Some of us experienced nose bleeding and headache’.

Another passenger tweeted, “the crew in the Jet Airways B737 aircraft operating flight 9W 697 from Mumbai forgot to press ‘bleed switch’ due to which cabin pressure could not be maintained. Oxygen masks deployed in mid-air.

How can the crew members forget? This is not a joke; our life was on board”
All the affected passengers were treated at the Mumbai airport hospital. Another flight brought the passengers to Jaipur after the treatment.

As per DGCA officials, 166 passengers were onboard the flight and of them, 30 suffered nose and ear bleeding. Some others complained of headache and nausea. Oxygen masks got deployed in mid-air.

According to Jet Airways statement, all the guests were deplaned safely and taken to the terminal. First aid was administered to a few guests who complained of ear pain and bleeding nose. (We) Regret the inconvenience caused to its guests.