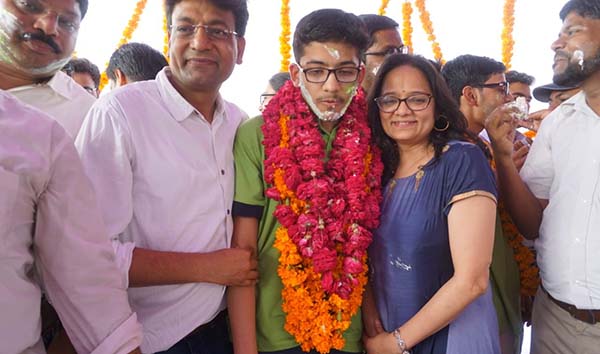 Nalin Khandelwal who topped NEET 2019 with his parents after the results were announced on Wednesday.

Jaipur: Nalin Khandelwal who is the NEET 2019 topper in the country distanced himself from social media for almost two years when he was preparing for the coveted exam. He said that he kept his focus on his goal and since social media and smart phones were distractions, he stayed away from both. Nalin completed senior secondary education from Prince Academy, Sikar and secured 701 marks out of 720. It is for the first time that a student has crossed 700 marks.

He said that maths was his biggest weakness, so he opted for bio. He also struggled with the concepts of physics, but instead of getting tensed over this he started working hard to grasp these concepts.

“We can’t avoid our weaknesses. We have to work towards getting rid of them. I studied NCRT books and pursued Class 11 and Class 12 curriculum to make the foundation strong,” said Nalin.

He said that focus and persistence are the best tools to take on any challenge in life.

“I tried to keep my head clear and make sure that I don’t feel depressed whenever I was stuck in my studies. I created a study routine and followed it rigorously,” said Nalin.

Nalin who basically hails from Sikar attended coaching classes in Jaipur. His father Rakesh and mother Vinita are doctors. His elder brother is also pursuing MBBS.

Last year, there were five students were among top 100 in the country. The number went up to seven this year. Lalit Agarwal secured 24th rank, Megha Gupta 94, Utkarsh Sharma 86, Saksham Choudhary 95 and Sameer Godara 12 and Naveen Kumar Sharma 72.

The results of NEET 2019 exam were declared on Wednesday.