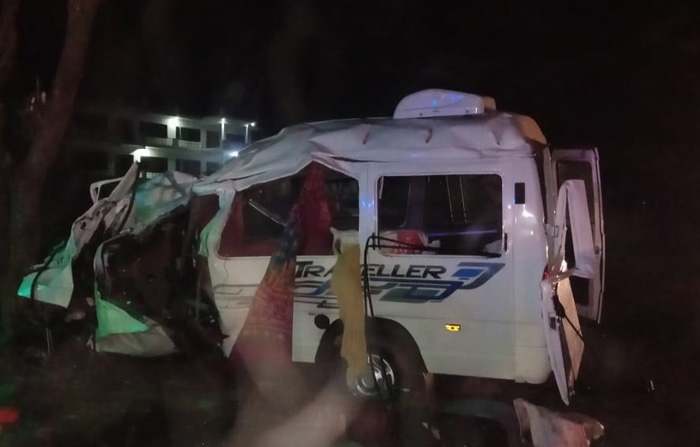 The mini-bus in which the Kuchaman road accident victims were travelling.

Jaipur: At least 12 people were killed while several others were injured when the mini-bus they were travelling in hit a stray animal on the road on Kuchaman City Mega Highway in Nagaur district on Saturday. A buffalo suddenly appeared on the road and the mini-bus driver couldn’t apply breaks on time. There were reports that the mini-bus was overspeeding. The police have launched an investigation. The victims are reported to be residents of Maharashtra.

The incident took place at around 3 am. The visibility on the road was reduced by fog.

“The mini-bus lost control when a buffalo suddenly appeared on the road. The vehicle hit the animal and then rammed into a roadside tree. The bus was completely damaged,” said a police officer.

The residents of a nearby village came to know about the mishap and rushed to the spot. They found over 25 people – some of them stuck in the bus, while others lying in pool of blood on the road. Many victims were crying for help.

The villagers informed the police following which senior police officers and a team from nearby police station arrived at the spot.

The victims were rushed to a government hospital in Kuchaman City in ambulances and private vehicles. The doctors and nursing staff were asked to report for duty. Five of the victims were referred to SMS Hospital in Jaipur due to the critical condition.

Till the reports last came, 12 victims were pronounced dead, while an equal number of mini-bus passengers were injured. The victims including women and children. Their bodies have been put in the mortuary of a government hospital.

All the victims were residents of Maharashtra and were on their way to Haryana.