Nagaur: 5 of family including 3 brothers killed in road accident 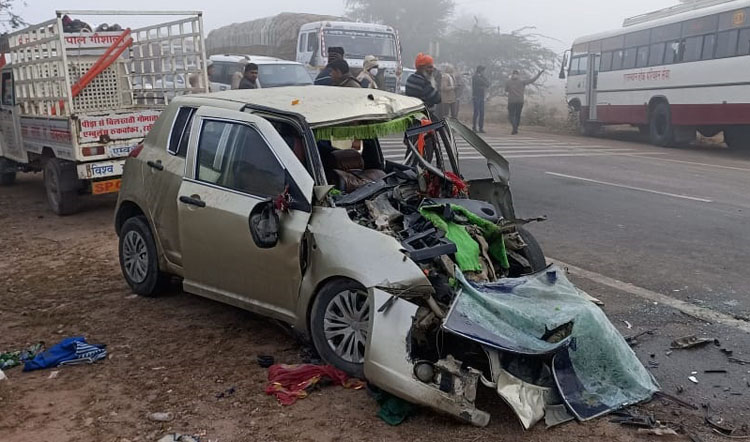 The car in which the family was travelling.

Jaipur: Five members of a family including three brothers killed when the car they were travelling in collided head-on with a Lok Parivahan Sewa bus in Nagaur district on Saturday. Those killed also include a 10-year-old boy and the three brother’s aunt. According to preliminary reports, the mishap occurred to heavy fog that reduced the visibility on the road. Two injured – a father-daughter duo – are undergoing treatment.

The mishap occurred near Chimrani village on Jodhpur Highway of Sadar police station area. The victims – all members of a family – were returning home after attending a condolence meeting held after the death of a relative.

A police officer said that four people Sanju (22), Rahul (12), Sita (65) and relative Bhaliram died on the spot. They were residents of Oladan village of Nagaur district. Ajay (10), Jyoti (13) and Dayalram (42) were seriously injured.

Sanju, Rahul and Ajay were siblings, while Dayalram is their father who is seriously injured. Jyoti is Dayalram’s daughter.

The three injured were rushed to JLN Hospital in Jodhpur after primary treatment. Ajay died on the way to Jodhpur.

The people in the car had left Nagaur in the morning to Soyla where the condolence meeting was being organized. The bus was on its way to Bikaner from Jodhpur via Nagaur. The two vehicles collided head-on near Chimrani on the highway. The accident happened due to high speed and fog. A crowd of people gathered after the accident. The police pulled out the people trapped in the car and rushed them to the hospital.