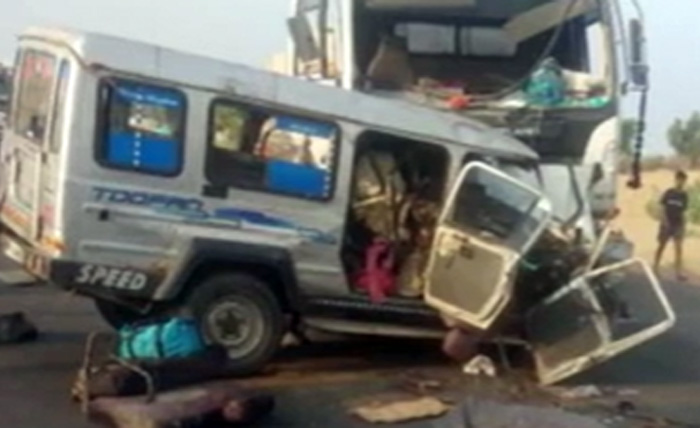 Jaipur: In a tragic road accident in Nagaur district of Rajasthan on Tuesday, at least 11 people were killed, while seven others were injured when the jeep they were travelling in collided with a truck. The victims belonged to Madhya Pradesh and had come to offer prayers at Ramdevra and a temple in Nagaur, they were returning home. Their vehicle was overcrowded. The police have launched an investigation into the cause of the accident.

The mishap occurred on Nokha Bypass near Shribalaji area of Nagaur. According to preliminary reports, the victims are residents of Sajjan Kheda and Daulatpur villages of Ghatiya police station in Ujjain district of Madhya Pradesh. Those who were killed include eight women and three men. The condition of most of the injured victims is stated to be critical. They were rushed to a hospital for treatment.

The collision was head-on and so intense that the jeep’s front portion was completely damaged. Many victims got stuck in the vehicle. The mishap caused a traffic jam on the highway. The police towed away the vehicles to clear the road.

The jeep could accommodate only 12 people, but 18 people were travelling. After visiting Ramdevra and Deshnok Karni Mata, the victims were returning to Madhya Pradesh. The truck was on its way to Nokha from Nagaur. At least eight victims died on the spot, while three succumbed to injuries on their way to the hospital.