Forest department to investigate the possibility that the cubs were poisoned to death. It was earlier speculated that the two cubs were mauled to death by another tiger. The bodies of the cubs of tigress - knows as T-79 - were found in Sawai Man Singh sanctuary on Tuesday. 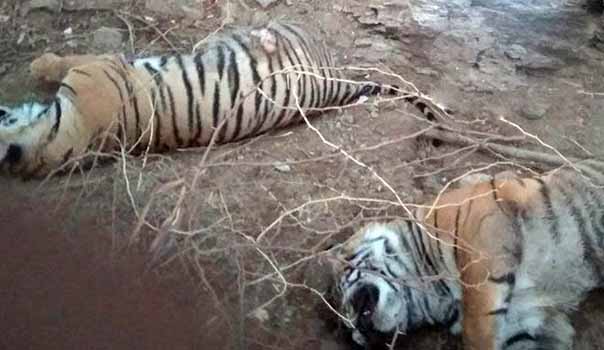 Jaipur: Two days after the bodies of two cubs were found in Sawai Man Singh sanctuary of Ranthambore Tiger Reserve, a forest department team launched an investigation into the possibility that the cubs may have been poisoned to death.

It was earlier speculated that the two cubs were mauled to death by another tiger. The cubs of tigress – knows as T-79 – were found in Sawai Man Singh sanctuary which is a part of the reserve. The bodies were lying at a distance of about 20 feet from each-other.

“Investigating the death as suspicious is part of our routine. We have to look into all the possibilities and rule out other angles to make sure that there is no foul play,” said a senior forest department officer.

However sources said that the injury marks found on the bodies may have not been caused in a tiger attack, leading to suspicion that the cubs might have been killed by the residents of nearby villages.

There had been several instances of villagers attacking tigers.

On March 19, a tiger died in Ranthambore National Park in Sawai Madhopur after a forest department team tranquilized him. The team was trying to rescue the tiger from a mob of angry villagers. The tiger, popularly known as T-28 was, was about 13 years old, not healthy enough to cope with the effects of the drug used in tranquilization. Once he was trapped by the team, he never gained consciousness. He later died.

Subscribe to WhatsApp updates for Jaipur News Click on the following link(s) to find the latest & related stories on: Ranthambore Tiger Reserve
RELATED

Strike: No Tiger Safari at Ranthambore tiger reserve for 7 days