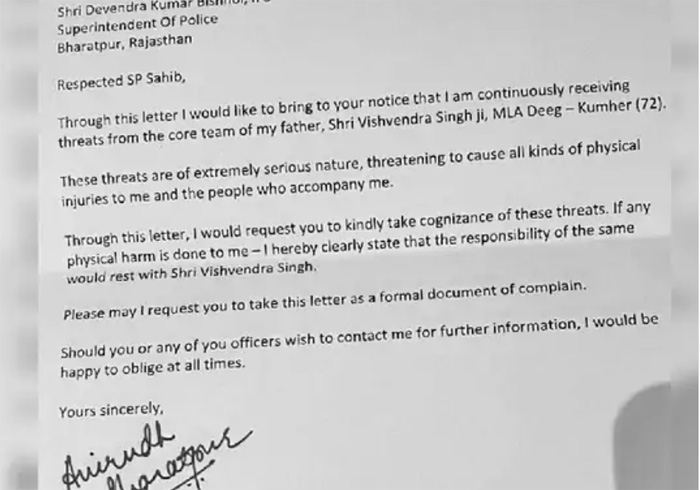 Anirudh's letter to the police.

Jaipur: The family fraction in the Bharatpur royal family has come to the fore once again. Anirudh Singh – the son of MLA Deeg-Kumher Vishvendra Singh – has accused his father of threatening him. He alleged that he and his friends were receiving threats from the supporters of his father. In a letter to Bharatpur SP Devendra Kumar Bishnoi, he stated that if anything happened to him, his father should be held responsible.

In the letter addressed to the SP, Bharatpur, Anirudh Singh wrote, “I would like to bring to your notice that I am continuously receiving threats from the core team of my father – Vishvendra Singh – MLA Deeg-Kumher”.

“These threats are of extremely serious nature, threatening to cause all kinds of physical injuries to me and the people who accompany me…Through this letter, I would request you to kindly take cognizance of these threats. If any physical harm is done to me – I hereby clearly state that the responsibility of the same would rest with Shri Vishvendra Singh,” Anirudh alleged.

He requested the police to take the letter as a “formal document of complaint”.

A senior police officer said that the complaint is being investigated by circle officer City Satish Sharma.

It is not for the first time that the dispute between the father-son duo has come to light.