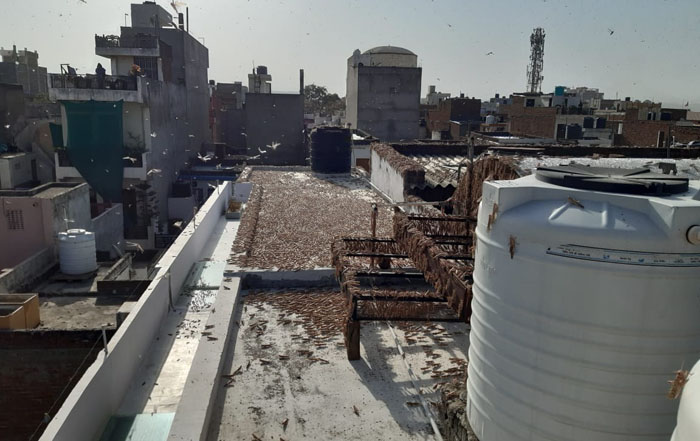 Jaipur: The residents of Muralipura and Vidhyadhar Nagar areas in Jaipur woke up to strange sights on Monday. After damaging crops and properties in rural areas of the district, ‘Tiddi dal’ (Locust swarms) reached heavily populated residential areas in Jaipur including Muralipura and Vidhaydhar Nagar. The residents in these areas saw their open compounds and roofs covered with locust swarms in the morning. Many got so scared that they called up police and district administration control rooms seeking help.

The sights of locust swarms were widely reported in both the areas. People shot videos and shared them on WhatsApp and other social media platforms . The officials said that locust swarms reached Jaipur late on Sunday night. Locust swarms settled on the roofs of houses. Many people reported clogging in open water tanks.

People were seen trying to get rid of locust swarms, but to no avail. People banged utensils to scare away the insects. The teams of agriculture departments were camping in the affected areas and spraying pesticides.

“When we woke up in the morning, everyone in the family was shocked. Locust swarms were everywhere. Then we started getting WhatsApp videos from neighbours and relatives in the area. We have never seen something like this,” said Kamesh Sharma, a Muralipura resident.