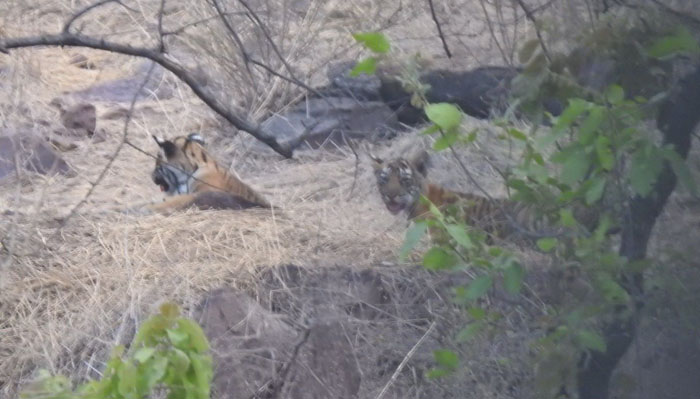 Jaipur: A tiger cub died in Mukundra Hills Tiger Reserve on Tuesday. The reserve has reported deaths of three tigers in the past 23 days. The cub was under the observation of doctors ever since its mother – known as MT 2 – was killed in a territorial fight with a tiger.

Wildlife lovers were overjoyed when MT-2 was spotted with two cubs in the first week of June. While one of the cubs died on Tuesday, the other is missing, according to preliminary reports. Another cub of tigress MT-4 has also gone missing.

With the death of three tigers and disappearance of cubs, Mukundra Hills now has only two tigers – MT-1 and MT-4.

The mother of the cub that died on Tuesday was killed in a territorial fight. Since MT-2’s death, the tiger was under the observation of a team of three doctors. An air-conditioned ICU was set up and the cub was being fed food supplements. However, the cub’s condition deteriorated over the past few days.

Mukundra Hills was notified as a tiger reserve in 2013. Spread over an area of about 760 square kilometres covering some parts of Kota, Bundi, Jhalawar and Chittorgarh districts, it was the third tiger reserve after Ranthambore National Park and Sariska.