Rahul Gandhi announced on Monday that the government – if voted to power – would deposit Rs 6000 per month in the bank accounts of millions of poor families. 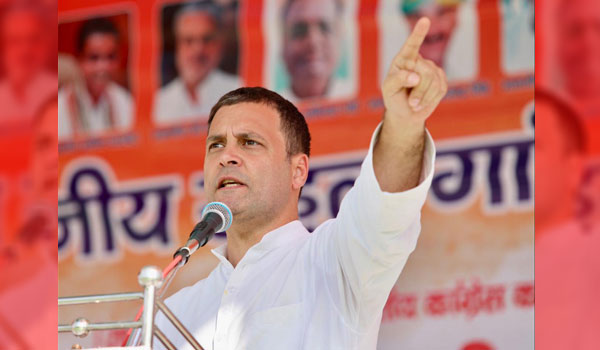 Jaipur: Congress President Rahul Gandhi reached Rajasthan on a campaigning tour for the upcoming Lok Sabha elections 2019 on Tuesday. He addressed people at Rajiv Gandhi stadium in Suratgarh of Ganganagar district in Rajasthan.

Gandhi then reached Jaipur Airport around noon and left for the party’s ‘Jan Sabha Rally’ at Bundi. He returned to Jaipur to address a Booth level sammelann at Ramleela Ground of Jaipur in the evening.

He briefly described his party’s under Nyuntam Aay Yojana (NYAY).

Rahul Gandhi announced on Monday that the government – if voted to power – would deposit Rs 6000 per month in the bank accounts of millions of poor families.

He said that the basic income of every poor family in India does not fall below Rs 12,000 a month.

The 20% poorest of poor families would get Rs 72,000 directly transferred in their accounts. This is the final assault on poverty

• In the last 5 years, PM Narendra Modi has opposed and weakened all the schemes that helped the poor. Modi referred to MNREGA as “digging pits”. He doesn’t understand that these schemes lifted 14 crore people out of poverty, said Congress President Gandhi.
• The Congress after coming to power will conduct a ‘surgical strike on poverty’ in the country.
• The BJP introduced demonetization and Gabbar Singh Tax. The Congress will introduce NYAY and a real GST.
• The party will transfer up to Rs 72000 per year in the bank accounts of poor families under NYAY scheme.
• In the 21st century, India will define a ‘Minimum Income Line’ and no one should live below this line. With this intention, we came up with NYAY. If Modi govt can give money to the rich, we can do it for the poor, said Gandhi.
• the BJP and PM Modi has not kept any of their promises, said Gandhi.
• Modi has divided the country, a nation of rich and a nation of poor. He is the chowkidar of big business tycoons, not the nation.

The Congress is expected to release its first list of candidates for Lok Sabha polls in the state on Wednesday.