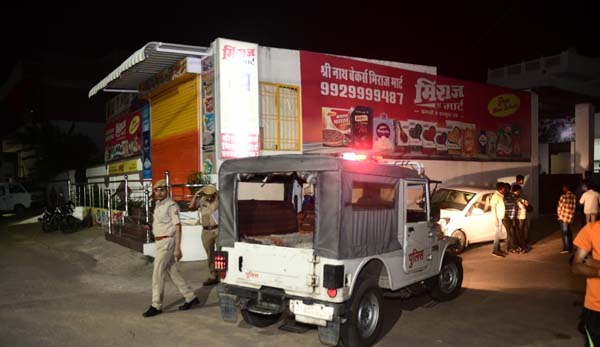 Jaipur: Four bike borne men shot at an employee of Miraj FoodMart outside St Anselm’s School in Mansarovar and robbed him of Rs 45 lakh, according to preliminary reports. The employee identified as Naresh Saini walked out of the office along with a coworker with the day’s collection when the robbery took place. The victim has sustained bullet injuries and was rushed to a hospital for treatment in critical condition. The loot created panic in the area.

According to the police, the robbery took place in Mangyawas area of Mansarover around 9 pm. The food mart is located in Mangyawas area of Mansarovar. Naresh Saini was carrying nearly Rs 45 lakh, while the coworker had Rs 8 lakh in another bag. As soon as they came out of the office, four men on two bikes approached him and opened firing. He sustained bullet injures near his waist. The robbers snatched away the bag from Naresh and drove away.

Police suspect that the robbers had conducted recee of the area and knew the routine of the victim. Barricades were put up on all exit roads in the area, but there was no clue about the whereabouts of the robbers. The police are studying CCTV footages to identify the robbers.