ACB carried out the investigation at Satish’s house located near Hanuman Nagar area of Ajmer till late night on Monday. The officials searched his house and found documents related to ownership of properties and bank accounts. 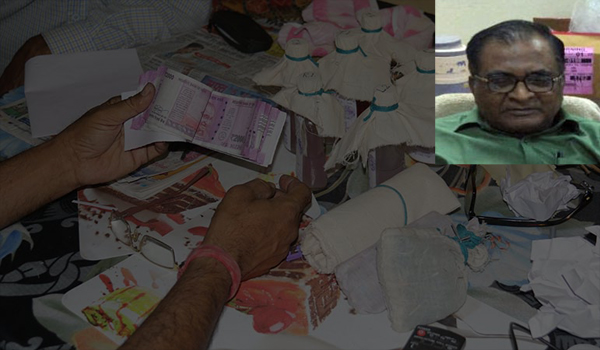 Jaipur: Dr Satish Agarwal, professor of Maharshi Dayanand Saraswati University (MDSU) in Ajmer who was arrested by Rajasthan ACB for taking a bribe from a female student in lieu of scholarship on Monday, courted many controversies in the past. Professor Agarwal was suspended for one-and-a-half years by the vice chancellor in 2010.
ACB carried out the investigation at Satish’s house located near Hanuman Nagar area of Ajmer till late night on Monday. The officials searched his house and found documents related to ownership of properties and bank accounts.

According to the ACB officials, MDSU Prof Dr. Satish Agarwal kept fee cheques of some students in his wardrobe rather than submitting it to the administration in 2010. After the information, Vice-chancellor of MDSU Prof. Bhaghirath Singh gave him a charge sheet. Dr. Agarwal was suspended for 1.5 years related to this alleged fraud. He joined the university again in 2013.

There were allegations that Dr Agarwal did not have a Ph.D. degree when he joined as a professor at MDSU.
Prof Dr. Satish Agarwal is the head of three departments including Law, Sanskrit and exam cell at MDSU university.

The accused Satish Agarwal demanded Rs. 1.5 lakh from the student for approving his scholarship payment of Rs 3 lakh. After negotiations, he agreed to settle for Rs 75,000. Professor Agarwal allegedly took Rs 25,000 during the verification of the complaint received by the ACB and agreed to take the rest of the amount later.

After the deal, the female student registered a complaint with ACB. ACB looked into the matter and after the complaint was found genuine, a trap was laid.

The student went to the accused with the remaining Rs 50,000 of the bribe amount. After Dr. Agarwal accepted the amount, the ACB team came and caught Agarwal red-handed for the crime on October 15.

Follow @ThePinkcityPost
Click on the following link(s) to find the latest & related stories on: ACB trap at MUSU