The five armed men robbed nearly 24 kg of gold and a cash amount of Rs 11 lakh. 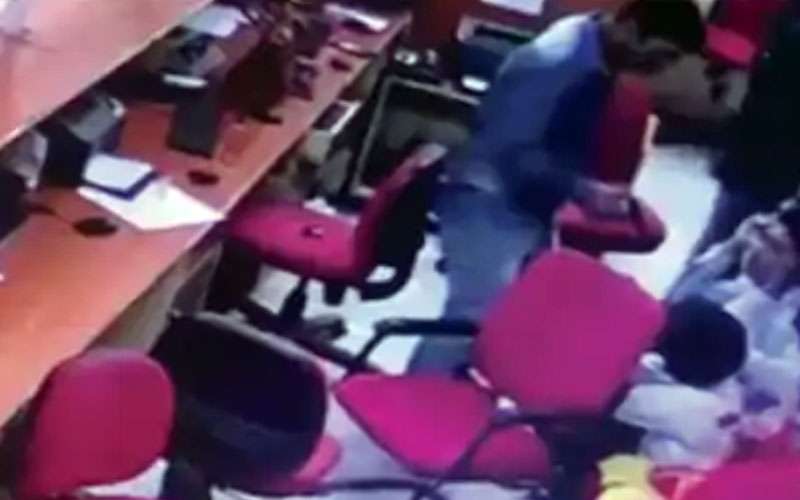 A CCTV video grab of Manappuram gold robbery in Udaipur

The employees who were held hostage for nearly 23 minutes said that the robbers created such horror they were utterly terrified. They were repeatedly slapped, tied up and threatened at gunpoint.

One of the employees Sonu Chhaparwal said that the robbers kept threatening them. “They pointed guns at our heads and said that they would shoot us if we made a sound. They had come prepared like they knew the layout of the place,” said Sonu. He added that they had come up with some devices to scan gold.

“The robbers were tech-savvy. They made sure that the gold didn’t have any GPS device so that it couldn’t be traced,” said an employee.

One of the employees Bhawna Meghwal said that after she entered the office around 9.30 am, someone pushed her from behind and when she turned around, she saw a gun pointed at her.

“They huddled us together and tied up our hands. They started slapping the men and forced them to hand over the keys to the locker. They then took away all the gold and cash.

The five armed men robbed nearly 24 kg of gold and a cash amount of Rs 11 lakh. The office is in Sundarwas in the city’s ​​Pratapnagar police station area. The miscreants were marked. They entered the office around 9.20 am o and left after robbing it at 9.43 am.

The company had kept a GPS tracker in the box in which the gold ornaments were kept. The robbers removed the tracker and threw it away so that they could not be traced. The gold belonged to more than 1,000 people who had given it to Manappuram as collateral.

The robbers came on bikes. A police team rushed to the office after the police control room received a call from the employees.

There were only five employees in the office.