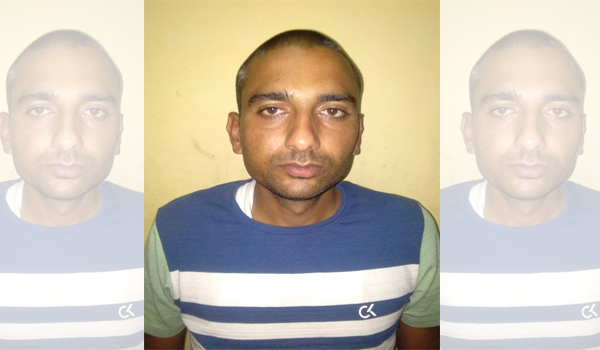 Jaipur: Harmada area police arrested a man identified as Vishal Yadav for murdering his father by attacking him with an iron rod and a knife on April 10 in Jaipur.

Vishal’s father identified as Phoolchand Yadav allegedly used to abuse and fight with his family members after getting drunk every day due to which Vishal killed him, said police as per the preliminary investigation.

The Harmada and Murlipura police revealed the details of the case after a 15-day long investigation over the matter in a press conference on Thursday.

The accused Vishal Yadav aka Vicky is a resident of Suncity township near Harmada area of Jaipur. He was living with his family including mother, sister, and father. He killed his father on April 10 out of anger.

According to the police, the accused Vishal took his mother and sister to their shop located at Vidhyadhar Nagar on April 10 at around 10:30 am leaving his father alone in the house. Vishal came back to his house at noon from the back gate and attacked his sleeping father with an iron rod.

After attacking his father - Phoolchand Yadav - multiple times with the iron rod on the head, he attacked him with the knife till the time he was dead, added police.

To trick the police and family members, the accused scattered all the things in the house to make it look like a robbery scene.

Vishal fled away from the spot and came back to his house with his mother and sister at evening and found his father’s body lying on the floor. He started acting as if it was the robbery scene and someone has killed his father following a loot at his house.

Police officials from Chomu, Harmada, and Cyber cell rushed to the spot after getting the information on April 10. They took the body of Phoolchand Yadav at the mortuary for the postmortem examination.

Officials discovered several CCTV footages of the township after the incident. Officials suspected the deceased Phoolchand’s son Vishal in the case. As Vishal was seen coming into the colony at around noon in one of the CCTV clips, said police.

Police took Vishal in custody for a while. Vishal kept telling made-up stories related to the incident and after a few days, he accepted that he has killed his father.

As per Vishal’s statement, ‘My father used to abuse my mother, sister, and other family members daily after getting drunk. He used to fight with neighbors and other relatives too. He did not take care of the family financially and continuously consumed liquor. The behavior was unbearable and intolerant for me due to which I murdered him’

Further investigation is on, said police.