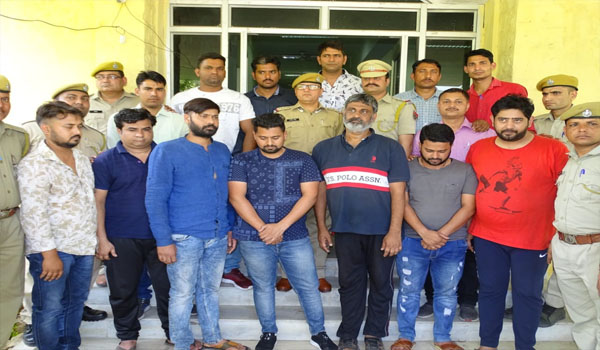 Jaipur: Kota police busted an IPL betting racket and arrested seven members of the gang on Wednesday. The arrests were made from a flat near Borkhera and Kethunipole area in Kota on Tuesday night and busted the gang.

Police caught them red-handed and recovered records suggesting betting placed on the match worth over Rs 538 crore. This is one of the biggest actions by police in Kota by far, said an officer.

Police have booked the accused men under sections of Gambling act and 66 B (Cyber-crime) of IT act with others.

The police also recovered 40 mobile phones, two laptops, two set-top box, Rs 40000 cash and three record registers. The arrested men are the residents of Kota and were living in a rented house near Borkhera area.

Police got a tip-off about the gang operating near the Adarsh Nagar area of Borkhera in Kota on Tuesday.

According to the police, three registers were recovered from flat in which betting records of Rs 538 crore was found. Another record in their hard disk and online software suggesting betting transactions worth crores of rupees was also recovered.

The accused took bets from people who placed their money on the match through some websites. This involves a big network of people betting on matches online from different states, said sources.

The men are in police custody and the officers are interrogating them. Further investigation is going on.

Similarly, Jaipur police arrested 14 members of a betting racket a flat of My Haveli near Bhankrota near Jaipur-Ajmer highway on Tuesday. Police recovered records suggesting betting placed on the match worth crores of rupees. The police also recovered 82 mobile phones, six laptops, four LEDs, Rs 54000 cash and two SUV cars. The arrested men are the residents of Jodhpur, Nagaur, Jaisalmer, Bikaner, and Jhunjhunu.

In another case, Jaipur police arrested seven men for betting on the ongoing IPL 2019 matches near Jaisinghpura Road in Jaipur on Saturday night.

Police are keeping a close eye on betting rackets active during the IPL matches.