Major fire breaks out at Chanakya Hotel in Jaipur 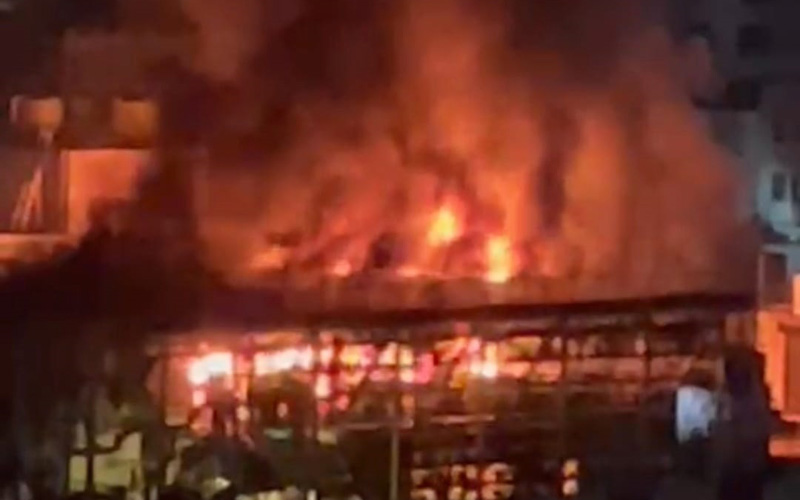 A video grab of the fire at Chanakya Hotel in MI Road area.

Jaipur: A major fire broke out at a hotel in the busy MI Road area on Thursday morning. The fire started at the hotel’s rooftop bar and restaurant. According to preliminary reports, there were a few guests on the rooftop when the fire broke out and they got stuck. The police rescued them and the members of the hotel staff with the help of a civil defense team.

At least 6 fire brigades were pressured into service. It took firefighters over two hours to control the fire. According to reports, the fire broke out on the rooftop of Hotel Chanakya on the third floor. The third floor housed a bar and restaurant called Hotel Night Jar.

The guests and members of the staff panicked when they saw flames around 3 am. The fire spread quickly. The hotel management informed the police following which a civil defense team and fire brigade vehicles were rushed there.

Fire brigade personnel used water cannons to douse the fire. With the help of the civil defense team, the police started rescuing all the guests present in the hotel. The guests were staying on the first two floors. They heard the commotion and woke up. They started running out of their rooms.

About seven guests were trapped on the rooftop. With the help of six fire brigade vehicles including the hydraulic fire brigade, the fire was controlled in about two and a half hours. The rooftop bar and restaurant were completely gutted by the fire. The cause of the fire could not be ascertained.