The fire broke out inside a store in the operation theater (OT) of CT surgery department situated on the second floor of the Bandar Bhawan in the hospital around 5 am. 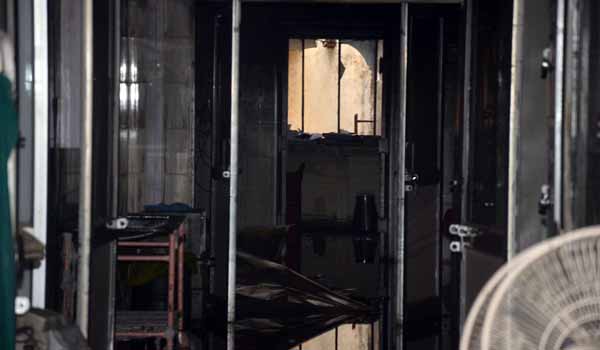 Jaipur: A major fire at SMS Hospital created panic among patients, their wards and medical staff on Wednesday morning. The fire broke out inside a store in the operation theater (OT) of CT surgery department situated on the second floor of the Bandar Bhawan in the hospital around 5 am. Smoke from the fire engulfed the entire CT surgery ICU, creating a stampede like situation. Six fire tenders were pressed into the service. It took them nearly three hours to control the situation completely. This is the second incident of a fire in SMS Hospital within the past 15 days. Fire had broken out at cardiology department’s cath lab due to short circuit in Bangar Bhawan earlier. On Wednesday, as the news of the fire spread throughout the hospital, the wards tried to rescue patients. They didn’t find stretchers, so they carried the patients on foot. The mayhem continued for nearly three hours. The fire started in the store and then spread to the nearby ICU. Smoke engulfed the entire cabin. Patients reported difficulty in breathing. The family members lifted the patients and carried them outside. They were then shifted to Semi ICU nearby; however there was no oxygen supply. Oxygen cylinders were arranged for them. As smoke engulfed the cardiology and neuro surgery departments, a stampede like situation was reported. Fire tenders were rushed to the spot after the hospital administration informed the police control room and the fire department. “The cause of fire is still being investigated. We roped in six fire tenders. The fire was doused almost immediately, but the smoke posed the bigger problem because it had spread to several other places on the floor,” said a fire department officer.
Follow @ThePinkcityPost