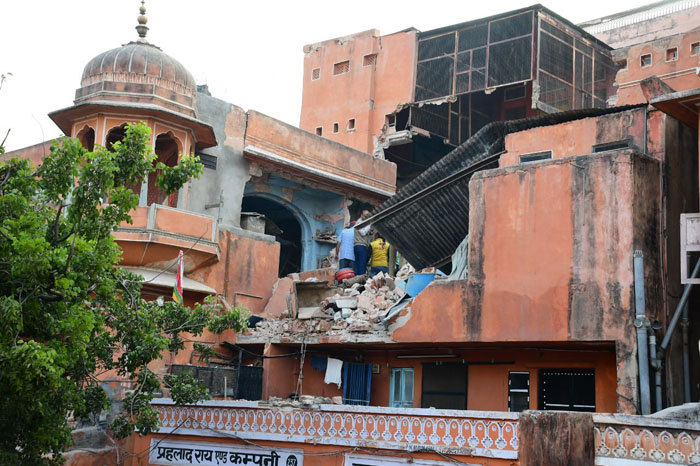 Jaipur: Two people including a 16-year-old teenager were killed, while a man was injured when an LPG cylinder reportedly exploded on the first floor of a building on the premises of Tadkeshawar Temple in Chaura Rasta on Monday. The woman was the wife of the temple priest, while the teenager was a tenant in the same building. Many adjoining houses were evacuated following the tragedy.

The incident took place in the morning. The victims were identified as Manju Vyas (42) – wife of temple priest Govind Vyas and Abhishek (16). Abhishek lived with his uncle as a tenant on the second floor of the building. The priest and his family live on the first floor. Abhishek had gone to Govind Vyas’s floor to check on the LPG leakage. As soon as he turned the light switch on, the cylinder exploded. A large portion of the building caved in. While Abhishek and Manju were killed, Rajesh was seriously injured.

According to preliminary reports, the nearby residents heard a loud thud and explosions following which they informed the police control room. Fire fighters and rescue teams rushed to the spot.

The body of the teenager was pulled out from under the debris around 7.30 pm. Another body was found at 10 pm. The second victim was Manju. Rajesh was also pulled out of debris and rushed to a hospital. He is undergoing treatment and his condition is stated to be critical.

The local residents said that the building was already in a dilapidated state and caved in following the explosions.

The devotees who had come to visit Tadkeshwar Temple were evacuated. The occupants of nearby houses were also asked to stay out of their homes. The police stopped traffic on the road.