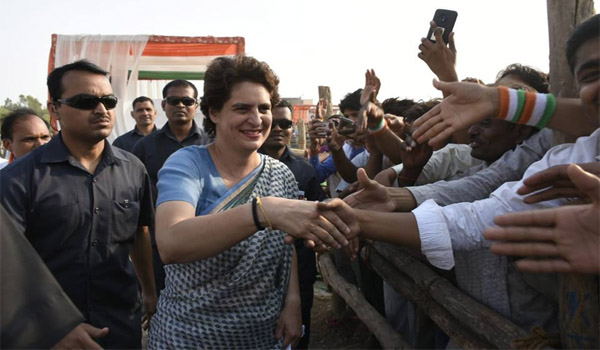 Jaipur: National general secretary of the Congress Party and Rahul Gandhi’s sister Priyanka Gandhi will likely address a public rally at Jodhpur on May 27 ahead of the fourth phase of Lok Sabha polls 2019, said party sources. The party officials are also preparing for her roadshow in Jaipur before May 6.

Jodhpur constituency will go to polls on April 29 while Jaipur on May 6. The official announcement about Gandhi's visit has not been made yet by the Congress party officials but sources informed that the preparations for her visit to Jodhpur are on.

According to the officials, Congress’ star campaigner Navjot Singh Sidhu will address some public rallies at Jodhpur, Jhalawar, and Banswara on Friday. Also, Gujarat’s young leader Hardik Patel will hold rallies in the Rajasthan’s constituencies located near the Gujarat territory on Friday.

Congress leader Pratap Singh Khachariyawas told media persons that the efforts are being made to organize a public rally in Jaipur in the presence of National general secretary Priyanka Gandhi before May 6.

As Congress’s Jyoti Khandelwal is contesting elections from Jaipur seat and former Olympic player Krishna Poonia from Jaipur rural, it will be a great support for them if Priyanka Gandhi comes to Jaipur.