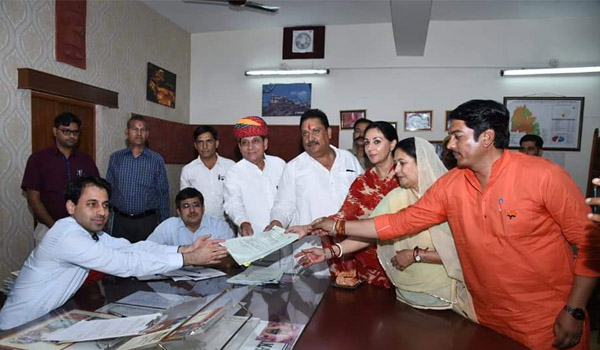 Jaipur: Ex-royal princess of and former BJP MLA of Sawaimadhopur Diya Kumari filed his nomination as a BJP candidate from Rajsamand constituency on Monday. She is fighting the Lok Sabha polls for the first time.

Diya Kumari’s candidature was announced for Rajsamand on Saturday along with four other candidates for Bharatpur, Karauli-Dholpur, and Barmer constituencies.

Diya has been pitted against Congress leader Devki Nandan Gurjar. The party wants Diya to contest from Rajsamand due to the substantial Rajput population in the town.

Diya Kumari and husband Narendra Singh got divorced earlier in January nearly 21 years after they tied the knot following a much-publicized courtship.

She joined BJP in September 2013 in the presence of then chief minister of Gujrat Narendra Modi and senior leaders including Rajnath Singh and Vasundhara Raje.

The polling on Rajsamand seat along with 12 other constituencies including Tonk-Sawai Madhopur, Ajmer, Pali, Jodhpur, Barmer, Jalore, Udaipur, Banswara, Chittorgarh, Bhilwara, Kota, and Jhalawar-Baran is scheduled for the Fourth phase on April 29.