Sangod MLA Heera Lal’s election tour reached the former Congress minister Bharat Singh’s village Kundanpur at 9:30 pm on August 27. Many people had gathered near Petrol pump of Kundunpur by which the Heeralal’s tour was to pass. 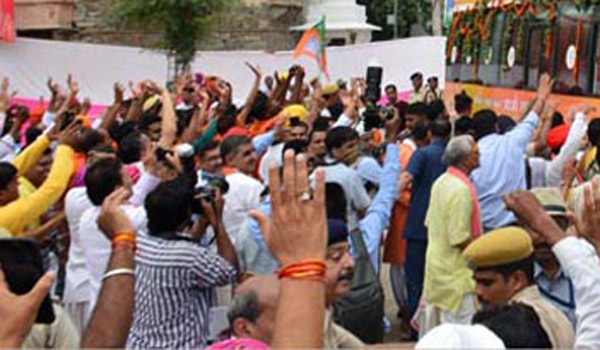 Jaipur: A group of people – allegedly some Congress workers – pelted stones at Gaurav Yatra being taken out by Sangod MLA Heeralal Nagar on Monday. The tour was on its way to to Kundanpur in Kota district when the incident took place. Police had to resort to mild lathicharge to disperse the crowd of protestors. Later, MLA Heeralal took out the tour in the town under police protection and also addressed a gathering. Sangod MLA Heera Lal’s election tour reached the former minister Bharat Singh’s village Kundanpur at 9:30 pm on August 27. Many people had gathered near Petrol pump of Kundunpur by which the Heeralal’s tour was to pass. As soon as the Yatra reached the village, some people hurled stones at people participating in the yatra. Some workers were injured. The Congress workers showed black colored flag. BJP workers too got aroused by this and started screaming slogans. The situation led to a fight between the Congress and BJP workers. Police lathi charged and managed to deal with the situation. Several police officials were present at different locations of the villages at Sangod since morning to maintain law and order. Sangod MLA Herralal Nagar said the Congress is not able to bear the development work done by BJP. They have no other option left other than to protest violently. Earlier, Jodhpur police have arrested 17 people in connection with stone pelting at the cavalcade of Rajasthan chief minister Vasundhara Raje during her Rajasthan Gaurav Yatra in Jodhpur division a few days ago. The cops have made these arrests after identifying the attackers from video footages of the incident.
Follow @ThePinkcityPost