Panic gripped Dhanmandi area in Kota on Monday when some unidentified masked men opened firing at people at a petrol pump and robbed its employees of Rs 21 lakh. 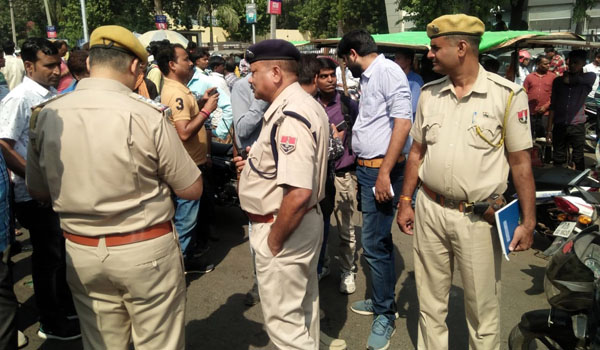 Police on the spot, after the incident happened at Kota petrol pump on Monday.

Jaipur: Panic gripped Dhanmandi area in Kota on Monday when some unidentified masked men opened firing at people at a petrol pump and robbed its employees of Rs 21 lakh.

The shooters targeted those who had come there to get fuel for their vehicles, creating a stampede-like situation for a while. The shooters fled the spot after the incident. According to preliminary reports, some people were injured in the shooting. The police were however yet to confirm this. A search has been launched for the shooters.

The incident took place around 11 am in Gumanpura police station area. According to eye-witnesses, the robbers were on bikes. They entered the manager’s office and snatched a suitcase from the manager. The suitcase contained nearly Rs 21 lakh. They then tried to escape.

When the petrol pump employees chased them, they opened fire. According a petrol pump employee, the cash had accumulated as it couldn’t be deposited in the bank due to weekend holidays. The manager was about to leave for the bank to deposit the amount before the robbery happened.

According to the sources, some people were injured in the sudden firing. They are admitted to a nearby hospital.

Police have launched the search operation against the shooters. Barricades were put up on roads to check vehicles and catch the criminals.

Dhanmandi is the most crowded area of the city with several police checkpoints and high security. Despite this, the accused managed to run from the spot. Further investigation is going on.