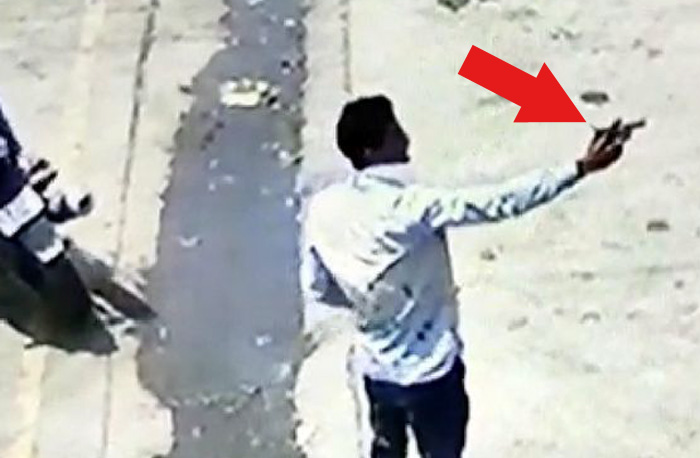 One of the shooters with a gun on CCTV footage

Jaipur: In yet another broad daylight shooting incident, a gang of criminals opened fire at a trader in the vegetable market of Chhawani area in Kota. The criminals flaunted their guns and fired at least 5-6 rounds. The trader, Kailash Meena, had a narrow escape. The police have launched an investigation. The incident was caught on CCTV. The police are studying the footage to identify the shooters.

The incident took place around 11 am. Kailash Meena, a resident of Ballabhbari, runs a shop in the Chhawani vegetable market. About six men came on bikes. While three were in the bike parking area, three others walked to his shop and started shouting his name. When Kailash Meena came out, they took out guns and opened fire. Bullets didn’t hit Meena. The police are investigating if the criminals wanted to scare Meena by firing or missed the target.

The shooters fled from the spot on their bikes. Meena expressed ignorance about the identity of the shooters. He said that he didn’t have a dispute with anybody.

“We will be able to identify the shooters soon as they were caught on CCTVs installed in the vegetable market. It is under investigation as to why the criminals targeted the trader,” said a police officer.

The police put up barricades on all exit routes of the areas, but the shooters were yet to be apprehended.

Earlier in Bharatpur, a doctor couple was shot dead in broad daylight.