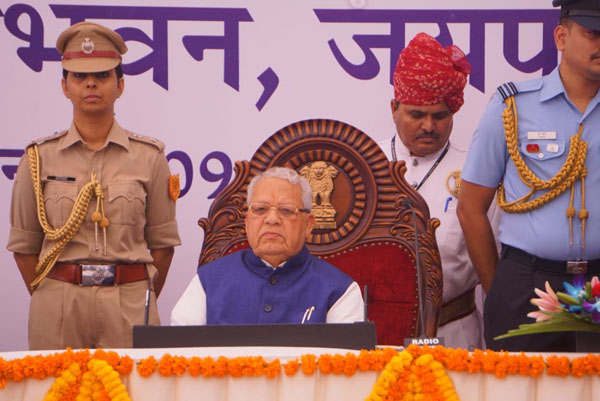 Jaipur: Kalraj Mishra took oath as the new governor of Rajasthan on Monday. He was administered the oath by chief justice of Rajasthan high court S Ravindra Bhat.

Kalraj Mishra was among the five governors by the BJP government recently. Mishra’s family members, politicians, senior police officers and bureaucrats were among those present on the occasion.

Chief secretary Gupta read out the warrant of appointment issued by the President.

Before the oath taking ceremony, Kalraj Mishra visited Moti Dungari temple along with his wife Satyavati Mishra and offered his prayers.

Kalraj Mishra who has been MP from Deoria Constituency of Uttar Pradesh was the union minister for micro, small and medium enterprises in the previous Narendra Modi government. He was then appointed the governor of Himachal Pradesh.

Kalraj Mishra was born in 1941 in Malikpur village of Gazipur area in Uttar Pradesh. His father was a government teacher. He completed his post graduation from Mahatma Gandhi Kashi Vidyapeeth in Varanasi. He has held importation positions in RSS.