The joint venture of Rajasthan government and HPCL will be called HPLC Rajasthan Refinery Limited. 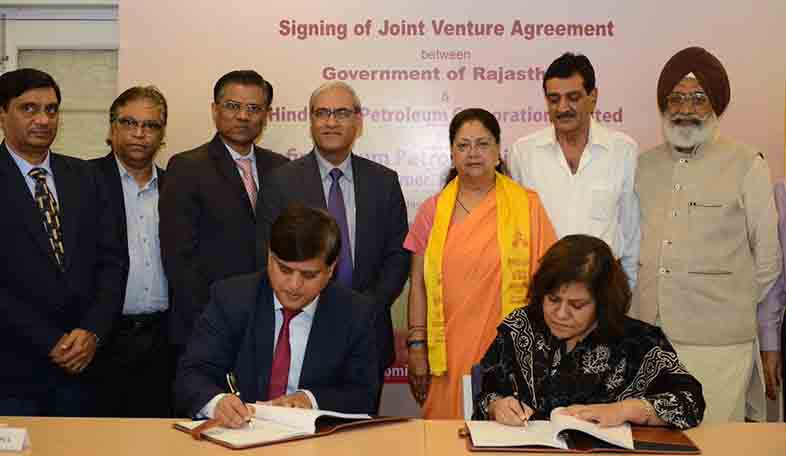 A joint venture agreement was signed between HPCL and Rajasthan government for refinery in Barmer's Pachpadra. Image credit: Twitter

Jaipur: A joint venture agreement was signed between the Rajasthan government and HPCL on Thursday to speed up the work on the oil refinery, proposed to be set up in Barmer’s Pachpadra. The venture will be called HPLC Rajasthan Refinery Limited. The terms and condition of the venture have been finalized with the signing of the agreement. The Union Government gave approval to the Barmer Petroleum Refinery-cum-Petrochemical Complex on Wednesday.

The agreement was signed at the chief minister’s residence on Thursday. The state government and HPCL representatives discussed works that are to be undertaken over the next one year.

Principal secretary (mines and petroleum) Aparna Arora and Director (Finance) of HPCL J. Ramaswami signed the JV agreement respectively on behalf of the state government and the HPCL. Raje expressed satisfaction on the progress of the refinery. She directed the officials to proceed further on the project on equally fast pace as soon as the Environmental Clearance was received from the Union Ministry of Environment.

Raje said that after receiving all necessary clearances on slated deadlines, ground breaking ceremony would be solemnised for start of the actual work for the refinery. She said that after honest negotiations between the officials of the state government and the HPCL led to the significant savings of Rs. 40,000 crore. Also, the state would receive 12% Return On Investment (ROI) instead of earlier 2% accepted in the previous MoU for the refinery.

The CM said that this would be the first petro refinery in the country to produce BS-VI emission standards. This would be a major step towards controlling carbon emissions and have substantial impact on environment. She directed the state government officials for skill training of local youth through ITIs and skill development centres to get them employment in refinery and ancillary industries. She further asked for exploring the possibilities of setting up a petroleum institute in the western Rajasthan.

Raje said that this project of refining Rajasthan’s Crude oil to produce Petroleum and other petrochemical products would substantially strengthen the economy of not only Barmer, but entire Rajasthan. With this, she said, direct and indirect employment opportunities would be generated in huge numbers. She suggested the officials to make special efforts to promote local small entrepreneurs for setting up ancillary industries.

The Rajasthan government promised to provide basic infrastructure facilities including power, water and roads for the project soon.

The process of getting NOC from the union ministry of environment will also get momentum now.

The Rajasthan government wants to complete the project as soon as possible keeping in view the assembly elections scheduled to take place next year.

The government on April 18 signed a new MoU with Hindustan Petroleum Corporation Limited (HPCL) for setting up a refinery in Barmer’s Pachpadra. The work on the refinery-cum-petrochemical complex will now resume nearly three and a half years after it was stalled when the BJP government came to power. The refinery will likely be functional by 2021.

The refinery will come up on nearly 12500 bigha land allotted in the name of a join company of the state government and HPCL. The land is close to a salt lake in Pachpadra.

Under the project, a crude oil pipeline (50-60 km in length) and a water pipeline (nearly 200 km in length) will be laid. With a capacity of producing 9 million metric ton oil per annum, the refinery will cost Rs 43,149 crore. HPCL’s share will be 75 percent, while rajasthan government’s equity will be 26 percent. The state government will pay Rs 3738 crore for its 26% equity. The government will give interest free loan (the viability gap funding) of Rs 16,845 crore to HPCL. The viability gap funding (VGF) will be Rs 3,736 crore annually. This will be paid over a period of five years by the government.

New MoU for Barmer Refinery: Important things you should know