[VIDEO] Jodhpur: Newborn dies as doctors quarrel in OT; one removed from duty 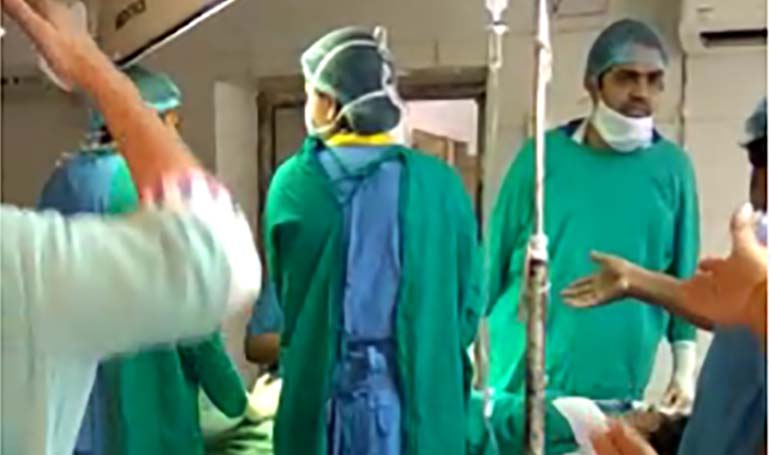 Two doctors fought with each-other as a pregnant woman in serious condition was battling for life on the operating table. Watch the video below:

Jaipur:  One doctor was removed from duty at Umaid hospital in Jodhpur when he and his colleague engaged in verbal argument in an operation theater (OT) while a pregnant woman was battling for life. By the time they got their argument settled, the newborn had died and the woman was profusely bleeding. The hospital administration has forwarded the complaint to the state’s personnel department, recommending a disciplinary action, against another doctor. Watch the video below:

The matter came to light when a nursing staff member shot video of the incident. It went viral on social media websites.

Anita was rushed to Umaid Hospital in critical condition.  A doctor in the outdoors sent her to the operation theater for checkup. The doctor said that any delay in treatment could cost the life of either the baby or the woman.

When she was wheeled into the OT, gynecologist Dr Ashok Neniwal was attending another pregnant woman. Another doctor ML Tak asked a nursing staff member to check on the woman’s blood pressure.

It was when Dr Ashok and Dr ML Tak engaged in a verbal argument. They started shouting at each-other and hurled abuses. The nursing staff intervened, but they didn’t stop for several minutes. While they were quarreling, the two women were on the beds unattended.

By the time the doctors paid attention to Anita and operated her for a cesarean delivery, it was too late. The baby died a few minutes after the birth.

The embarrassed hospital administration put Dr Neniwal on awaiting posting orders, while a recommendation to take action against Dr Tak was sent  to the state’s personnel department.