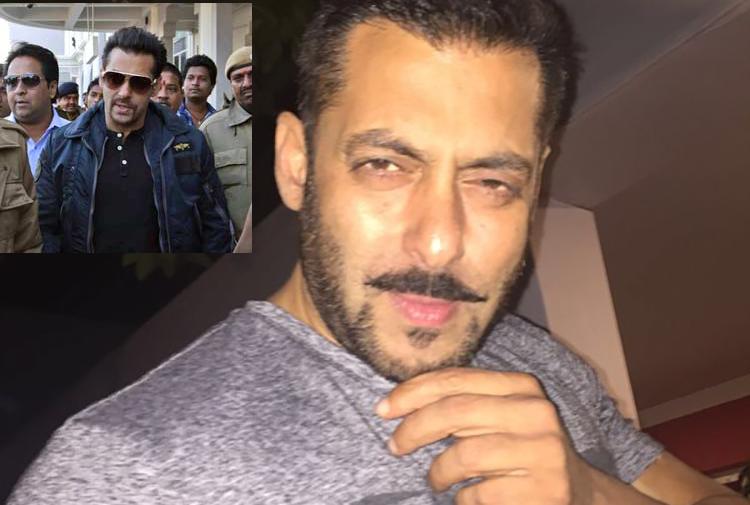 Jodhpur: A Jodhpur court on Wednesday acquitted Bollywood actor Salman Khan in a case registered against him under the Arms Act in 1998 with Luni police station here. He was accused of using his guns for killing two blackbcuks near Kakandi village on the intervening night of October 1 and October 2, 1998. It was alleged that the license of the guns he used for the alleged poaching during his stay in Jodhpur had expired.

Fans of the Bollywood actor started gathering outside the court in huge numbers since morning. The police had to disperse the crowd several times.

The hearing was to begin at 10.30 am, but when Salman didn’t reach the court till 11.15 pm, the court asked his lawyer to ensure his presence within half an hour. The court said that the hearing will be postponed till afternoon if the actor didn’t turn up.

The court pronounced the judgement minutes after the actor appeared before the court around 11.45 am.

Another case under the Wildlife Protection Act is still under trial. This case is regarding the poaching of two blackbucks near Kakandi village on the intervening night of October 1 and October 2, 1998. The next date for the hearing in this case is January 25. Other actors of ‘Hum Saath Saath Hain’ including Sonali Bendre, Tabbu and Saif Ali Khan are also accused in the case.

In the case pertaining to the Arms Act, he was accused of using his guns to poach blackbucks, a protected animal. The license of these guns had expired, the prosecution had claimed. This argument is also the basis for the case.

The court in Jodhpur reserved the judgment after both the sides completed their arguments on January 9. Chief judicial magistrate (district) Dalpat Singh Rajpurohit fixed January 18 as the date for delivering the judgment. The court had asked the Bollywood actor to be present in the court. Salman and his sister Alveer reached Jodhpur on Tuesday.

According to the case, the license of Salman Khan’s revolver and rifle had expired on September 22, 1998. Salman produced the guns before the Jodhpur police on October 15, 1998. Salman didn’t report his weapons going missing between September 22 and October 15 to the police, the prosecution argued. Prosecution presented 28 witnesses in the case.

The prosecution in the case argued that the license for the guns had expired on September 22 and Salman didn’t renew it. Nor did he inform the police if the guns were stolen.

As per the defense, the weapons were not in possession of Salman Khan between September 22 and October 15. The prosecution argued that the onus of proving this fact was on Salman and no evidence to this effect were produced before the court.

The prosecution also argued that the postmortem report proves the blackbuck died of gun shot and shock. The case was proved against Salman beyond doubt after the testimony of eye-witnesses Chhogaram and Sheraram and policemen Satyamani Tiwari and Ashok Patani, the doctor who conducted the postmortem Ganpat Singh and ACP with Mumbai police Vijaynarayan Pandit.

The defense argued that Salman had a transit permit to carry weapons in Gujarat and Haryana till September 30, 1998. The license was renewed on December 22, 2012.

The defense also argued against the claims of the prosecutions that two illegals gun had been found from the room where Salman was staying two days prior to the alleged poaching incident. The defense said if such a weapon was found, why the police didn’t take any action under the Arms Act immediately after the recovery. Why the FIR was registered in mid-October?

The defense also argued that no witnesses were made to testify if the weapons that were taken as evidence in the case were the same as used in the alleged poaching incident.

The defense also tried to highlight alleged contradiction in the statements made by witnesses. It claimed that the first postmortem report had established that the blackbucks were killed by dogs.

Salman Khan was accused of hunting two blackbucs in Kankani village of Rajasthan along with other accused Saif Ali Khan, Tabu, and Sonali Bendre. The actor was also charged with two other poaching cases of Chinkara deer and black up in Bhawad village and Mathania village respectively.

The actors were staying in Jodhpur for the shoot of ‘Hum Saath Saath hain’. Salman was arrested on October 12 after members of the local Bishnoi community registered an FIR in the matter. The actor posted bail and was released on October 17, five days after being taken into custody.

A trial court in 2006 held Salman guilty under the Wildlife (Protection) Act and sentenced him to five years imprisonment with a fine of Rs 25,000. A sessions court also upheld the judgment in 2007, but it was overturned by Rajasthan high court in 2016.

What happened when (the Arms Act case)