Tanya got the black belt degree by Kukkiwon in Taekwondo at South Korea in 2016 and entered the Indian book of records and World Records India. 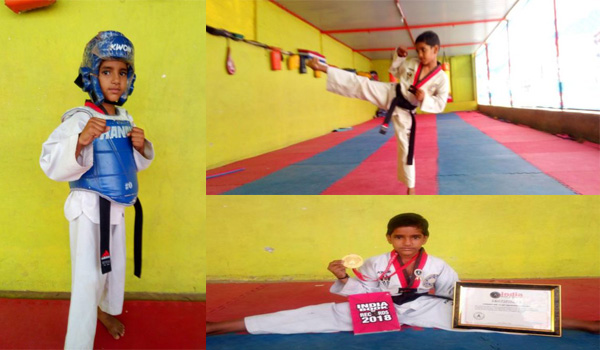 Jaipur: Seven-year-old Tanya Yogi from Jhunjhunu district of Rajasthan will be felicitated at an International conference in Bhopal on March 15 for being the youngest girl in the country to get a black belt in Taekwondo. She achieved this feat in 2016 when she was only five years old. Her name entered the Indian book of records in Top 100 and World records India. Tanya Yogi will also be felicitated at Genius Indian Achiever Award 2019 in Mumbai on May 12. Tanya Yogi is a resident of Hameeri Kalan village of Jhunjhunu in Rajasthan. She is a class three student and was born on February 23, 2011. According to her family members, Tanya started learning martial arts when she was only three. She won several medals at different national and international competitions and platforms. Tanya’s father Subash Yogi is the director of Yogi Sports academy at Jhunjhunu and is an International Taekwondo coach. She learned martial arts from her father. Tanya got the black belt by Kukkiwon in Taekwondo at South Korea in 2016 and entered the Indian book of records and World Records India. She was five years three months and twenty-nine days old when she became the youngest black belt holder in Taekwondo. She was felicitated on January 26, 2019, by district collector in her hometown. Tanya represented Rajasthan in two national Taekwondo competitions held at Karnataka and Dehradun. She won a gold medal at the National Muthai Championship at Dehradun in 2017. She also represented India in the World Taekwondo Championship at Nepal.
Follow @ThePinkcityPost