The resort is spread over an area of 40 acres. 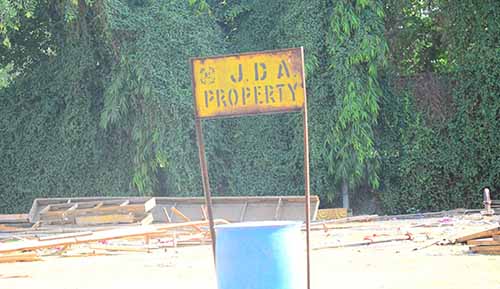 Jaipur: Jaipur Development Authority (JDA) on Monday took possession of Resort Cambay Golf situated in Jamdoli. The resort is spread over an area of 40 acres. The land alone is worth hundreds of crores. The property was sealed for alleged violation of allotment conditions.

After taking possession of the premises, sign boards proclaiming it to be a property of JDA were put up. The properties included Cambay Golf Academy and Golf resorts. The villas bought by people there were also sealed.

JDA officials said that residential properties can not be built on this land, so those who bought them were also at a fault.

According to reports, a team of JDA officials showed up with heavy police force to take possession of the resort land.

JDA officials said that in the name of investment and development, a company owned by former IAS officer Sanjay Gupta got the land allotted for just Rs 18 crore in 2007. Nearly 120 residential villas were constructed on this land illegally. For the commercial use of the land, many facilities including a resort, a marriage garden, swimming pool and indoor and outdoor games, restaurants etc were also developed.

JDA had served a notice last week after cancelling the allotment and the lease.