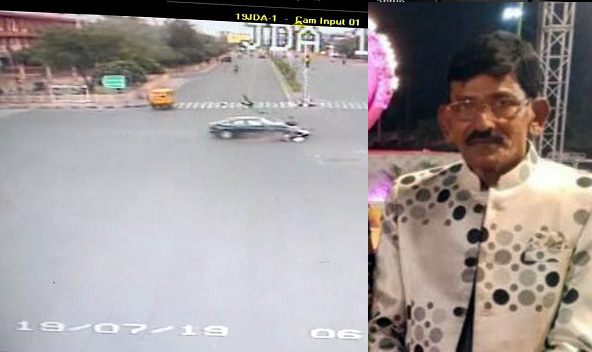 Jaipur: Jeweller Abhay Daga who was seriously injured when a car being driven by an intoxicated man hit him at JDA Circle on JLN Marg succumbed to injuries on Sunday. The family members were deeply grieved over the trategy and expressed anger over the leniency for the accused driver. They said that he was under influence of alcohol so he should charged with murder, instead of just negligent driving.

Abhay Daga was struggling for life at the Trauma Center of SMS Hospital for the past three days.  The family members said that two passers-by rushed Daga to hospital, not the driver – Siddhartha Sharma. It was initially believed that Siddhartha had taken Daga to hospital for treatment, but the probe revealed that two youths who had witnessed the mishap had helped him.

The eyewitnesses have reportedly told the police that Siddhartha wanted to escape from the scene, but he couldn’t due to deflated airbags of his Audi car. He got stuck inside the car.

The mishap had occurred at JDA Circle on Friday. Daga was on his way to Govind Dev Temple around 6.15 am from his house in Mahaveer Nagar on a scooty when the Audi rammed into him.

Abhay Daga’s son Mayur Daga demanded that a case under murder charges should be registered against the driver.

“An intoxicated man mows down someone on way to a temple early morning. The man responsible for this is released even before being booked. What kind of irony is that,” Mayur said.

This was the second mishap due to overspeeding on JLN Marg in three days. On July 16, two siblings were killed when an overspeeding car rammed into their bike at JDA Circle.

One of the four persons who were injured in the second mishap also succumbed to injuries on Sunday. The victim was identified as Sunita. She was a resident of a slum area near Jyoti Nagar. She was selling balloons at the traffic junction.