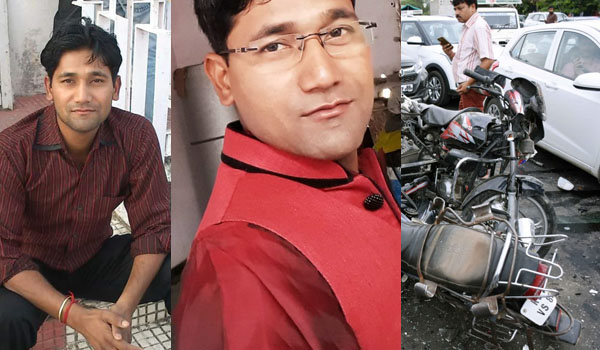 Vivek and Puneet who were killed in JLN Marg accident at JDA Circle on Tuesday.

Jaipur: Despite the tall claims of the city traffic department about making JLN Marg an Adarsh Road, the frequent accidents have exposed unchecked traffic norms violations and over-speeding.

In the latest mishap, two siblings were killed while four others were injured when a car rammed into other vehicles on a road crossing. The vehicles were waiting for the traffic signal to go green when the overspeeding car hit them. Two brothers who were killed were identified as Vivek Parashar and Puneet Parashar.

The accident caused panic on the road at JDA Circle. The white car which rammed into other vehicles was being driven by one Virendra Jain, a resident of Sawaimadhopur district. He had come to Jaipur for his mother’s treatment at SMS Hospital. Virendra was coming from Gandhi Circle and rammed the car into other vehicles at JDA Circle. According to eye-witnesses, the car was overspeeding.

Puneet and Vivek were on a bike waiting for the green traffic signal. Both were killed on the spot. Four others – Sarita Devi, Ratan Lal Meena, Meetha Lal and Dhanraj – were injured. The car driver remained in the vehicle for a while and then walked out. He was taken into custody and admitted to SMS Hospital for treatment.

The traffic police officials informed Rajkumar Parashar – the father of the two deceased youths. He came to the mortuary of SMS Hospital. When he was told that his sons had died, he broke down and started crying hysterically. His wife and mother were not aware of Vivek and Puneet’s deaths till late evening.

The road accident was caught on CCTV camera installed at JDA circle. The police were going through the footages to know how the mishap occurred. They said that the car driver has been arrested and further investigation is going on.

Rajkumar has reportedly told the police that the car belonged to the owner of the factory where he worked. He had come to Jaipur for his mother’s treatment. The police officials said that he was driving the car at a speed of more than 120 km per hour.