To be organized on the dunes of the Thar Desert, the festival aims to showcase the colorful culture of Rajasthan through various activities, competitions, and cultural performances. 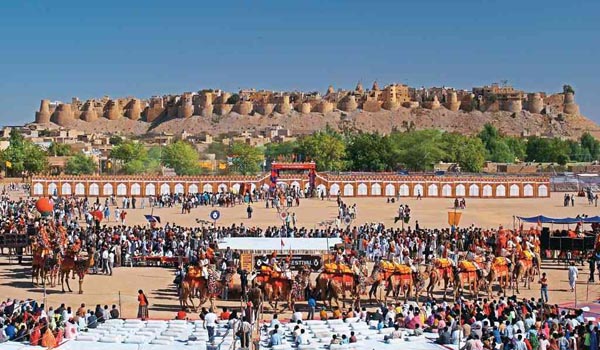 Jaipur: The Golden City of Rajasthan is all set to host one of the most popular festivals – Jaisalmer Dessert Festival 2019- from February 17 to February 19, 2019. The festival is also known as ‘Maru Festival’ in the state and organized at Sam Dunes - located 42 km away from Jaisalmer – every year. To be organized on the dunes of the Thar Desert, the festival aims to showcase the colorful culture of Rajasthan through various activities, competitions, and cultural performances.

The Rajasthan Tourism department and Jaisalmer authorities have started the preparations for the festival. The tourists will enjoy amazing folk performances, fascinating competitions and beauty pageants during the three-day-long annual festival at Jaisalmer. Apart from this, exquisite handicrafts will be displayed in the fair. Locals at the festival will be dressed in traditional bright costumes while depicting stories and history of the desert through their music and dance. 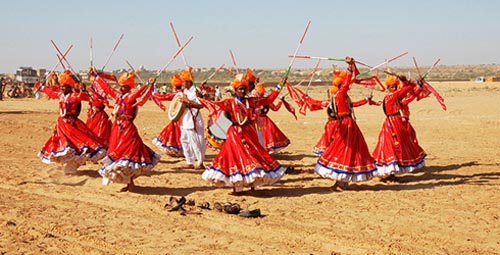 Activities and competitions including jugglery, folk dance, fire dance, camel race, turban tying contest, biggest mustache contest, dessert pageant, polo matches, desert safari, camel dance, and gymnastic stunts are the key attractions of this festival. The Dessert Festival of Jaisalmer is also a shopping paradise for many. You will find the most beautiful and colorful handicrafts and handloom items including clothing, accessories, home décor among others. The event will conclude on February 19 with the Rajasthani folk musical concert, Air force display, cricket matches, parachuting and a prize distribution ceremony. Jaisalmer was discovered by the Rajput ruler Raja Rawal Jaisal Singh in the 12th century. The city was a mid-spot for several trade routes including ancient Silk road in medieval times. Traders from Central Asia, Egypt, Arab and Persia used to come here. It became home to several trade fairs and festivals. One such legacy is the Jaisalmer Desert Festival, in which several traders and tourists from different parts of the world take part in. The festival takes place near the famous sand dunes of Thar dessert.
Follow @ThePinkcityPost