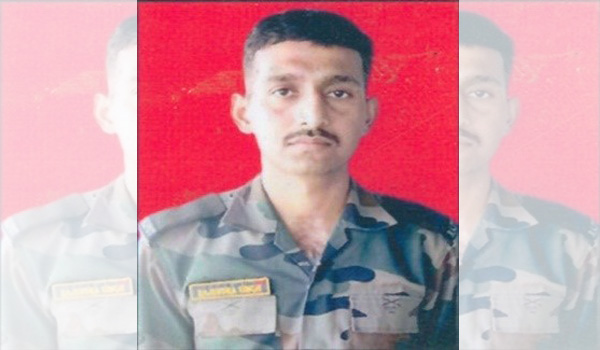 Army man Rajendra Singh who was martyred in Jammu on Saturday.

Jaipur: The last remains of martyr Rajendra Singh who was killed in an encounter with terrorists in Jammu on Saturday were consigned to flames full military honour at his native village Mohangarh in Jaisalmer district of Rajasthan. Rajendra Singh’s younger brother performed the last rites and lit the pyre. The rites were attended by thousands of people. They shouted slogans such as 'Shaheed Rajendra Singh Amar Rahe'. Eyes of many villagers welled up when the martyr was consigned to flames.

After the body reached Jaisalmer, the people came to know about it. They gathered in large numbers and showed flowers on this body on the way to Mohangarh.

When the body reached the village, the villagers tried to get a glimpse from the rooftop of their houses as the streets were overcrowded with people paying tribute to the martyr.

Union Minister of State for Agriculture Kailash Choudhary, Cabinet Minister Shale Mohammed, MLA Ruparam Dhande and many senior police and administration officials were present. Kailash Chaudhary announced that a statue of Shaheed Rajendra Singh will be built and installed in the village. He said that district level sports competitions will also be organized at the time of the statue's unveiling.

Rajendra is survived by his wife and a 2-year-old son. He has two brothers, but he was the bread earner for the family after the death of his father.