The accused were drunk when they ran into the woman early on Tuesday. 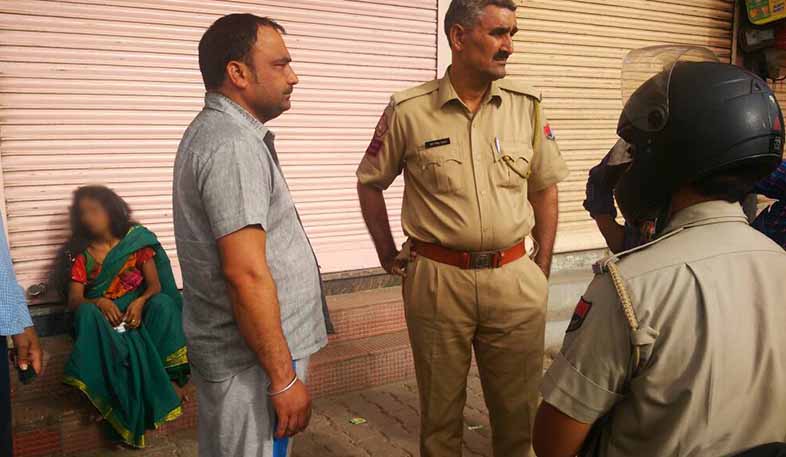 The woman who was attacked on her face with blades and gang raped is leaning on the shutters of a shop as a Sanganer police team investigates.

Jaipur: A day after 25-year-old woman was found naked in public in Sanganer area, the police on Wednesday arrested a youth and two minor boys for attempting to gang rape her and assaulting her when she resisted. They had attacked her with a beer bottle, wounding her severely and left her there naked. With help of CCTV footages, the police managed to identify and arrest them.

According to the police, the accused who were arrested are Subhash Kumar Mohanpuria (24), a resident of Shyam Nagar – III in Sanganer. The identity of two other accused detained by the police was withheld as they were minors.

The accused reportedly confessed to the crime. They told the police that they were drunk. They were coming towards Sanganer from Jaipur railway station when they ran into the woman wandering aimlessly. Police said that the woman was mentally challenged and had ventured out of her house without telling her husband.

The trio first offered her money and when she refused, they offered to drop her home. They took her to an isolated place where they attempted to gang rape, but she started screaming.

They severely beat her up, tore up her clothes and hit her with a beer bottle.

They then left her naked on the road and fled the spot.

The police found some footages showing the trio leaving the area. These CCTVs were installed outside shops on the main road. They were detained and questioned.

“They have confessed to the crime,” said Kunwar Rasthradeep, DCP, east.