They are demanding withdrawal of GST. 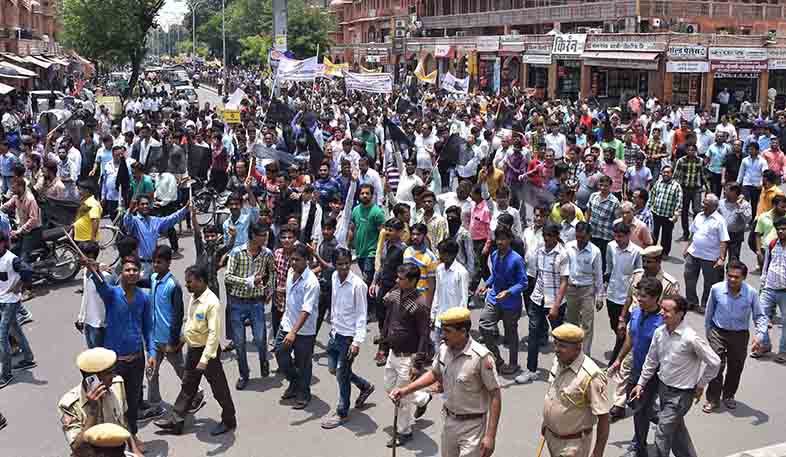 Textile traders taking out a protest rally against GST in Jaipur.

Jaipur: For the first time, textile traders in Jaipur took to roads in protest. They took out a massive protest rally against Goods and Services tax on textile items. Cloth markets in the city wore a deserted look as the owners of nearly 5000 shops in Jaipur supported the protest. They have formed a committee to put forward their demand for withdrawal of GST.

The rally began from Dhula House in Bapu Bazaar and marched through Chora Rasta, Tripolia, Bari Chowpar and Johari Bazaar. The protesters returned to Bapu Bazaar and organized a meeting there.

As an estimate, the textile business of nearly 20,000 crore was affected. As many as 50,000 people are directly or indirectly associated with the textile business in Jaipur. “This is for the first time in the past 70 years that textile traders will have to pay a tax. It will become a burden on common men,” said Omprakash Taneja, president of Sari Traders Association.

The government says that it will be the biggest tax reform in India since Independence. GST will subsume a large number of central and state taxes into a single tax. It is estimated that GST could raise GDP or gross domestic product growth by 1.5-2 per cent in the long term.

Cloth markets remain closed in Rajasthan in protest of GST