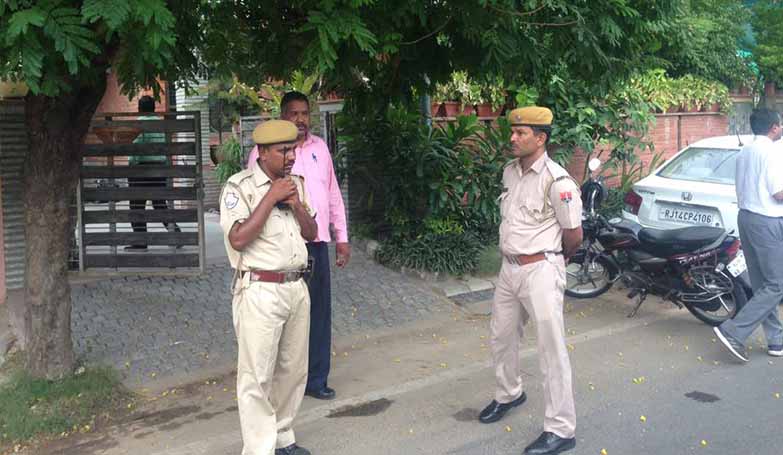 Policeman outside the house in Vaishali Nagar's Vidhyut Nagar area where robbers tied up an elderly couple and made away with cash and jewellery in broad day light.

Jaipur: Robbers barged into the house of an elderly couple in Vidhyut Nagar in broad day light on Tuesday, tied them, their granddaughter up and robbed a cash amount of nearly Rs 5 lakh besides jewellery worth lakhs of rupees at knife point.

The  robbers entered the house posing as tenants looking for a rented accommodation. Police officials said that the couple screamed for help after robbers left the house. Some neighbours heard their cries and freed them following which Viashali Nagar police was informed.

The incident took place around 3 pm at D-46 in Vidhut Nagar, owned by KC Garg.

According to the preliminary reports, some youths had visited Garg’s house a few days ago.

“They saw a To-Let sign board outside the house. They entered the house saying that they wanted to rent the place. The couple showed them around. The robbers then left,” said a police officer.

On Tuesday, the robbers came back and told the couple that they wanted to finalize the rental.

“As soon as they entered the place, they took out knifes and held Garg and his wife hostage at knife points. They tied up Garg, his wife and their granddaughter. They then rummaged through the house. They found Rs 5 lakh cash and other valuables including jewellery,” said the officer.

The couple then fled the spot, leaving the couple tied up.

Senior police officers rushed to the spot after the neighbours called the police control room and informed about the incident.

The police have released sketches of both the robbers.

Police put up barricades and launched a search for the robbers on the basis of description of appearance given by the couple.