DGP Rajasthan OP Galhotra said that a total of 1575 CCTVs have been installed in seven divisional headquarters in the state. Of them, 504 are in Jaipur alone. 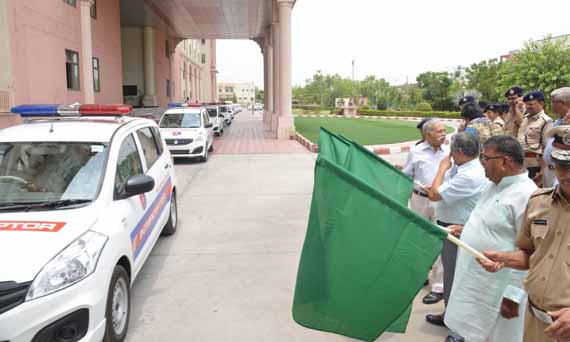 Rajasthan home minister Gulab Chand Kataria flagging off interceptors on the occasion of the inauguration of ABHAY Command and Control Center at PHQ in Jaipur.

Jaipur: Rajasthan police on Wednesday introduced central ABHAY command and control center at police headquarters (PHQ) in Jaipur on Wednesday. This will integrate the ABHAY command and control centers set up at divisional headquarters in the state.  Rajasthan home minister Gulab Chand Kataria inaugurated the center. Speaking on this occasion, DGP Rajasthan OP Galhotra said that a total of 1575 CCTVs have been installed in seven divisional headquarters in the state. Of them, 504 are in Jaipur alone. “The number of cameras will go up to 12,280 in the coming months. These cameras will be monitored through these command centers. It will help us keep an eye on suspicious activities, respond quickly to situation and gather evidence after a crime has been committed,” said the officer. The command centers are also connected with drone cameras. A demo was given when the center ABHAY command center was inaugurated on Wednesday. Police officials watched on screens surveillance videos being captured by drone cameras at three different places in Jaipur. In the command center at PHQ in Jaipur, eight big screens have been set up which can be used for monitoring ABHAY command centers at all divisional headquarters. “We will be able to monitor the positioning of all police vehicles as these are now GPS enabled,” said the officer. On this occasion, traffic inspectors were provided 20 interceptors, 14 GPS-enabled biks and 500 e-challan devices. Home minister Gulab Chand Kataria said that these resources will help traffic police department to keep an eye on traffic violators. “Of the total accidents, 35% involve two-wheelers. Drunken driving causes 30% of the total accidents. The latest technology and equipment will boost the confidence of the policemen and make them more efficient,” Katarai said.
Follow @ThePinkcityPost