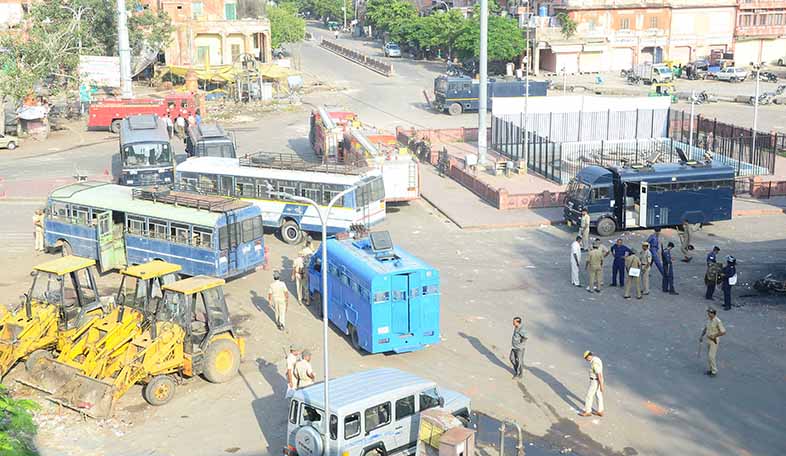 Jaipur: Drones used by Jaipur police to assess the law and order situation captured images of piles of stones on the rooftop of houses in violence-hit Ramganj area.

Sources said that it was primarily the reason for the police’s decision not to relax the curfew in Ramganj and continue with the internet ban in Jaipur on Sunday. Watch this video to know the impact of curfew in Ramganj:

A man was killed while several others, most of them policemen, were injured on Friday night when a minor spat between a constable of Ramganj police station and a youth snowballed into a major law and order situation. The police clamped curfew in four police station areas and stopped internet services in Jaipur.

On Saturday morning, the police used drones to assess the situation and found that people had made piles of stones on more than five dozen houses.

Sources said that the plan to hurl stones on the police station had been hatched even before the mob gathered at Ramganj police station.

After inspecting the area with the drone, the police stepped up security arrangements and became strict with implementation of prohibitory orders in the area.

Heavy police force has been deployed not only Ramganj, but in several other areas also. They include Sanganer, Jalupra, Bhatta Basti, Shashtri Nagar and Transport Nagar.

Peace committee meetings were also held. The issue of people gathering stones on the rooftop was raised in these meetings.

Many are blaming police’s intelligence failure and delay in handling the situation for the Friday incident.

There was already a ban on the gathering of five or more people in the area under section 144 of CrPC, but the police remained a mute spectator and allowed more than 2000 people to form a crowd outside the police station on Friday night.