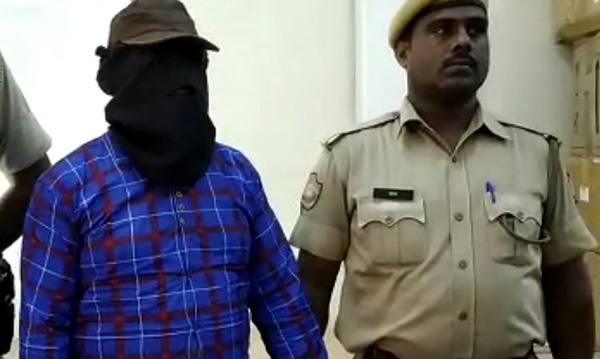 Notorious chain snatcher Ramchandra who was arrested by Jaipur police from Uttar Pradesh.

Jaipur: A notorious chain snatcher, Ramchandra Bawaria, was arrested for robbing over 150 gold chains in seven states of the country including Rajasthan over the past two years.

Rachandra, a resident of Jaipur, had been active in Jaipur for the past five months and snatched many gold chains. He robbed nearly 80 gold chains from Jaipur alone.

Ramchandra would fly to a city to commit a series of gold chains and then fly out. He would put the robbed gold as collateral in Muthoot Finance at 70 percent of the market value and obtain a loan.

Three men, Tulsi, Raju and Sandeep, have been identified as his accomplice. The in-laws of Tulsi live in a rented accommodation in Brahmapuri. Tulsi’s brother-in-law Sandeep would provide Ramchandra a bike without any registration numbers to commit robbery.

A series of gold chain robberies had put the city police in a tight spot. As the pressure mounted, the police started looking at some interstate gangs and came to know about Ramchandra.

Sources said that though Ramchandra had committed 80 robberies, the police are aware of only 50 incidents as the complaints were not registered in the other 30 cases.

“After robberies, Ranchandra would return to his native village in Uttar Pradesh. He would come back to Jaipur 8-10 days later and share the booty with his accomplices. Ramchandra owns many properties in UP and we suspect that he bought them with the money he made from gold chain robberies,” said a senior police officer.