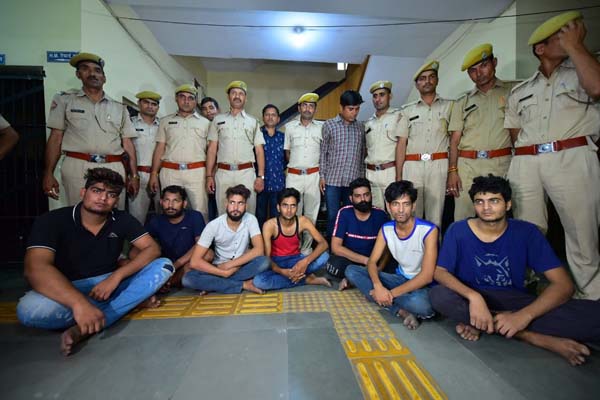 Seven kidnappers who were arrested by Jaipur police.

Jaipur: In a joint operation with Gujarat police, the city cops have arrested the kingpin of the gang involved in kidnapping businessmen from other cities and keeping the hostage. After arresting seven members of the gang from from Omex City – an apartment building in Bhankrota, the police arrested Vikki alias Vikas from Mumbai. Sources said the arrest was made with the help of Gujarat police. Vikki is being brought to Jaipur from Mumbai by a police team.

“Vikas was the kingpin of the gang. His name cropped up during interrogation with the seven kidnappers we arrested earlier this week,” said a senior police officer.

He added that Vikki used to identify the victims to be kidnapped by the gang and lured them in the name of helping them invest in profitable ventures.

“We started looking for Vikas after his name cropped up. He was finally arrested from Mumbai. Some of the gang’s victims belonged to Mumbai,” said the officer.

The police had on July 14 rescued three youths belonging to Mumbai, Andhra Pradesh and Bikaner from the gang. The youths were held captive by the gang for a week and were being tortured. The gang members had chopped off their ears and pulled out their finger nails in order to terrorize their family members and get ransom from them.

The gang has been involved in many similar kidnappings. They would bring their victims to Jaipur from Mumbai on some pretext and then keep them hostage.