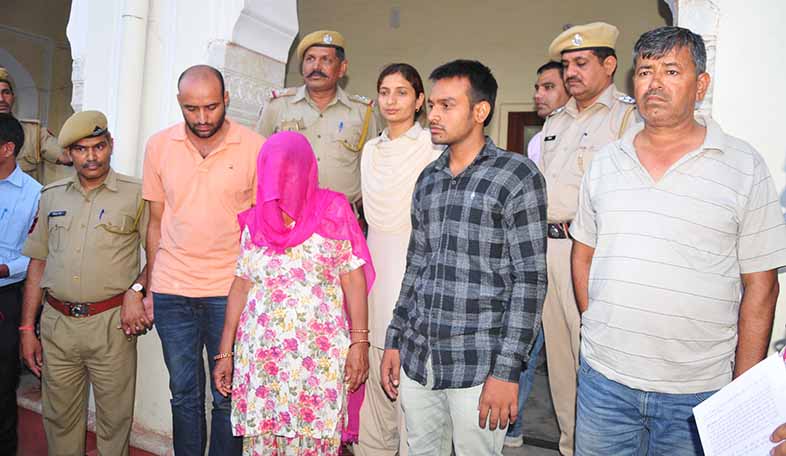 Parents-in-law of Amit Nayar and their aides arrested in honor killing case.

Jaipur: The city police on Wednesday arrested parents-in-law of Amit Nayar and their two aides for shooting him to death in his house on May 17. After arresting them, police revealed that the parents-in-law had paid Rs 2 lakh to two hired shooters to murder Amit.

The police have arrested two more men in connection with the crime. One is Bhagwana Ram who helped the couple find shooters for the job and the other is one Ravi alias Ravindra Shekhawat. The parents had paid Ravi Rs 3 lakh to kill Amit, but he backed out at the last moment. The parents then had to hire two other shooters, paying them Rs 2 lakh. They are still at large.

Jeewan Ram Godara and his wife Bhagvani Devi allegedly murdered Amit as they were against him marrying their daughter Mamta Choudhary. Amit and Mamta were from different castes.

While Jeewan Ram was arrested from Kaithal in Haryana, his wife was held in Sikar.

The parents-in-law visited Amit’s house in Karani Vihar’s Jagdamba Colony on May 17. Two men unknown to their daughter were also accompanying them.

Jeewan Ram and his wife tried to forcefully take Mamta away, but when she resisted, one of the two unidentified men opened fire at Amit. He sustained three bullet injuries and died on way to hospital.

Police commissioner Sanjay Agarwal said that Jeewan Ram and his wife fled from the spot along with the two shooters in a car.

“They dropped the shooters in Bagaru area. They then visited their son in Deedwana,” said Agarwal.

The police have already arrested Amit’s brother-in-law Mukesh from Nagaur district’s Deedawan town where he worked as a junior engineering in the railways. Jeewan Ram and his wife left the car at Amit’s place and then fled to Suratgarh after passing through Nagaur, Phalodi and Ramdevara.

“In Suratgarh, Jeewan Ram made his wife board a bus for Sikar, while he fled to Kaithal in Haryana,” said the commissioner.

He said that both were traced and arrested.

“We have also arrested Ravi alias Ravindra Shekhawat (21), a resident of Maulasar area in Nagaur. Jeewan Ram had met Ravi through Bhawana Ram who belongs to Lausal area in Nagaur district. Bhagwana Ram had been a member of local panchayat in the past. He promised Jeewan Ram that he would arrange for a shooter for him,” said Agarwal.

Ravi agreed to murder Amit for Rs 3 lakh. Jeewan Ram and Ravi even conducted a recee of Amit’s house and followed him to work to know his routine. Ravi however couldn’t be available for the job at the last moment.

“As he was unavailable, Jeewan Ram hired two other shooters and paid them Rs 2 lakh for the contract killing,” said the commissioner.

The police are yet to arrest these two shooters.

The car used by the couple to flee from the spot has also been seized.