Jaipur: A total of 525 cabins of the luxury train – Palace on Wheels (POW) – were booked in advance at Great Indian Travel Bazaar (GITB), which is taking place at JECC near Sitapura area of the city. The event will conclude on Tuesday.

As per the officials, the train got 80% of advance booking worth Rs 20 crore in just one day at the event. The popularity of the train was evident amongst the tourists. They were excited to travel in POW as compared to the other luxury trains.

A total of 525 cabins, each having the capacity for two people were booked on Monday, added officials.

CGM of PoW Pradeep Bohra said that the tourists are extended all the luxuries during their journey onboard the train. The administration is getting appreciation for the services due to which the train also runs in the off-season in April and September. The popularity of the train is now breaking advance booking’s records too.

This year, the Palace on Wheels will be renovated with the budget over Rs 7 crore. Amenities and luxuries will be increased to add to the convenience of the tourists. A different look in terms of interiors will be given to the train, added Bohra.

The tourists are offered Rajasthan’s signature dish ‘Dal-Baati-Churma’ in the train. Now, they will also be served Jodhpuri Pulao (yellow rice) and Gatta Curry, said an official at GITB representing PoW.

A team of delegates and foreign market tour operators visited the luxury train at Durgapura railway station of Jaipur on Monday.

The Great Indian Travel Bazaar (GITB) is one of the country’s leading business networking platforms for Inbound Tourism. GITB is organized by FICCI in collaboration with Government Of Rajasthan, Ministry of Tourism and Government Of India. The event started in Jaipur on April 28 and will conclude on Tuesday.

•             The Rajasthan Tourism Development Corporation (RTDC) has been operating the luxury train for the last 37 years. A lot of renovations were undertaken in 2018.

•             Palace on wheels is the only luxury train which completes its 34 rounds between September and April. 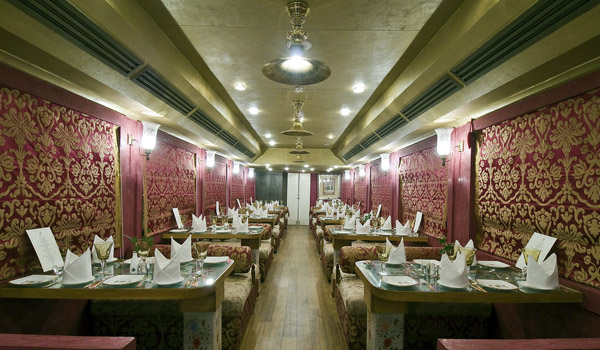