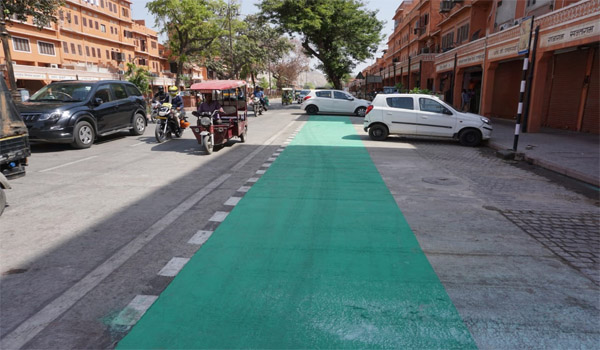 Jaipur:  A traffic lane system has been developed for the city’s first smart road named Kishanpole Bazaar Road – under the Smart City Project in the Walled City. The work of painting and building open-green corridors on the road was started from Tuesday.

Non-motorized vehicles such as eRickshaws, bicycles and others will be operated on the green corridors in the near future, said officials.

The width of the green corridor is 2.20 meters. It will be built on both sides of the market. Its length of one side will probably be 700 meters.

XEN of smart road project Suresh Beniwal said that the green corridor is being constructed under the guidelines of Indian Roads Congress (IRC). No inconvenience will be caused to the traffic police officers. The parking will be in a 30-degree angle.

Traffic division at Kishanpole market road under the smart project:

•    A 3.0 width area of the road has been allotted to parking space on which cars will be parked at an angle of 30 degrees.

•    Lastly, a 2.20-meter width road has been given for Green corridors in which non-motorized vehicles will run.