The incident occurred in Kanota Market near Mani Ram Ji Ki Kothi. The fire started in one of the saree showrooms of the building due to short circuit. 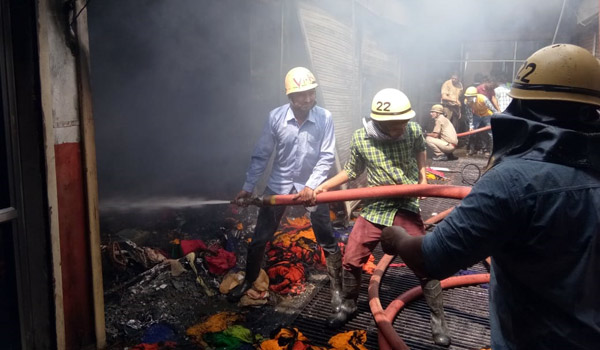 Jaipur: A massive fire broke out in a five- storey commercial complex located in Haldiyon Ka Rasta near Johari Bazaar in Jaipur on Friday morning. The fire engulfed five showrooms of the building. They were completely gutted in the fire. Eleven fire tenders were rushed to the spot from different fire stations of the city. It took fire fighters nearly two hours to control the fire. Hundreds of people gathered near the spot adjacent to Manak Chowk. The entire area was cordoned off and the traffic diverted during the fire fighting operation. The reason for the fire or the extent of damage is yet to be ascertained. The incident occurred in Kanota Market near Mani Ram Ji Ki Kothi. The fire started in one of the saree showrooms of the building due to short circuit. Chief Fire Officer Jagdish Phulwari said that they were informed about the fire at Kanota market around 9.30 am. He along with fire fighters reached the spot. After seeing the flames on the third floor of the complex, the fireman launched rescue operation and fire tenders were called in from different fire stations. 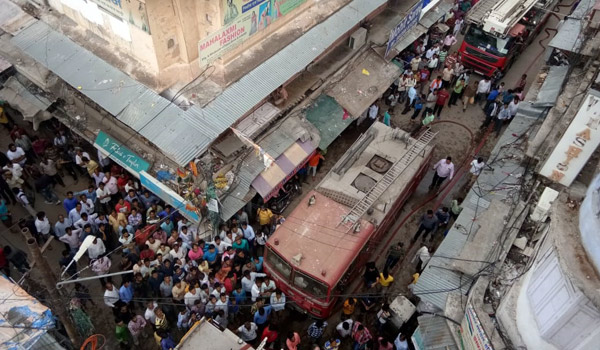 Had there been any delay on part of fire fight team, the fire could have turned catastrophic. The market was closed at the time of the incident and there was no rush of people. This made for fire fighting team to reach the spot on time. Fire tenders got stuck in the narrow street of the area, leading to a slight delay in reaching the spot. The local police and fire department have begun an investigation into the cause of the fire.
Follow @ThePinkcityPost