Jaipur: Many feared dead as lightning strikes in Amer 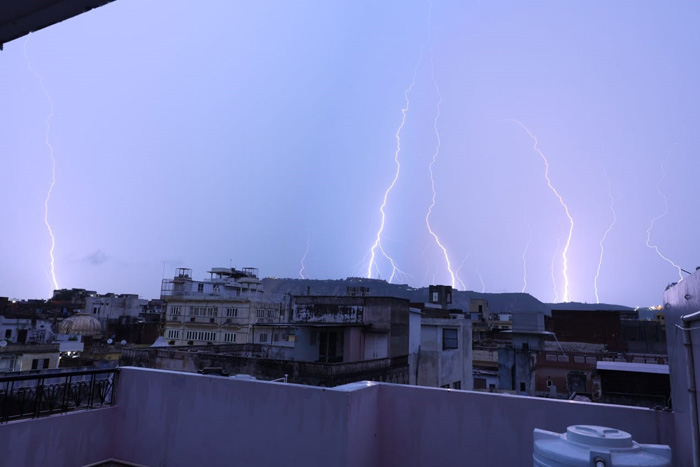 Jaipur: Over 12 people are feared dead in a lightning strike in the Amer area of Jaipur on Sunday. Nearly 50 people were gathered on a hilltop – known as ‘Watch Tower’ in Amer Maotha to enjoy the first showers of the monsoon when the incident took place. At least 10 bodies had been brought to SMS Hospital along with nearly 40 injured victims till the reports last came in. The police said that the total number of casualties is yet to be confirmed.

The incident took place around 7.30 pm. It was raining heavily in Nahargarh hills and surrounding areas. Many people – particularly youngsters – had gone to Amer Maota Lake, Nahargarh, Jal Mahal, and surrounding picnic spots to enjoy the weather. About 50 people were gathered on a hilltop taking selfies when a lightning bolt struck. Many of them fell off the hilltop. Some locals informed the police control room following which rescue teams were rushed there.

It is feared that more than 15 people were killed in the incident, but the police were yet to confirm the death toll. At least 10 bodies were in the mortuary of SMS Hospital till the reports last came in.

BJP president Dr Satish Poonia, the legislator from the constituency where the incident took place, talked to senior administration officers and asked them to take all possible measures to rescue the victims.

A senior police officer was quoted as saying by a local news channel that 16 people had died and efforts were on to identify the victims.