The young man fell into Kartarpura nullah with his bike while crossing a bridge. He started drowning, but somehow managed to hold onto a railing. 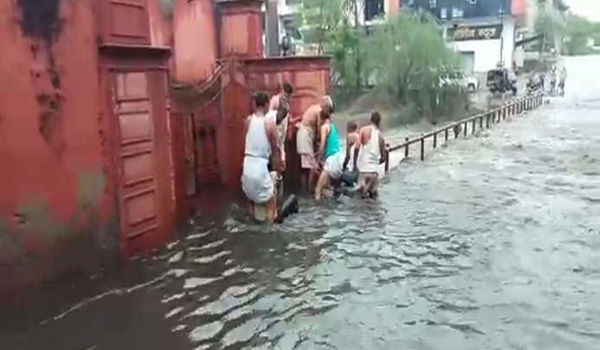 Video grab of the MLA saving the life of a biker.

Jaipur: MLA from Alwar’s Kathumar constituency Mangal Ram Koli and his gunman saved a biker’s life in Jaipur on Tuesday. The biker fell into Kartapura nullah near Sahkar Marg with his two-wheeler. Mangal Ram and his gunman who were nearby used his turban as a rope and pulled the youth out of the nullah which was overflowing due to rains.

The incident happened around 7 am on Tuesday. The young man, who is yet to be identified, fell into Kartarpura nullah with his bike while crossing a bridge. He started drowning, but somehow managed to hold onto a railing. On hearing his screams for help, legislator Mangal Ram Koli who happened to be close by rushed to his rescue. He first held his hands and then tried to pull him out with the help of his gunman.

Man was crossing the bridge when he fell with his bike into the water and started drifting in the nullah. His bike got stuck in a railing. Several similar incidents have been reported at the same place, but the administration and JDA is yet to pay any attention.

Legislator Mangal Ram Koli said that when he heard the scream for help, he rushed towards the bridge and tightly held the man drifting in the water with the help of his staff. Some local residents also rushed to his rescue and pulled him out.