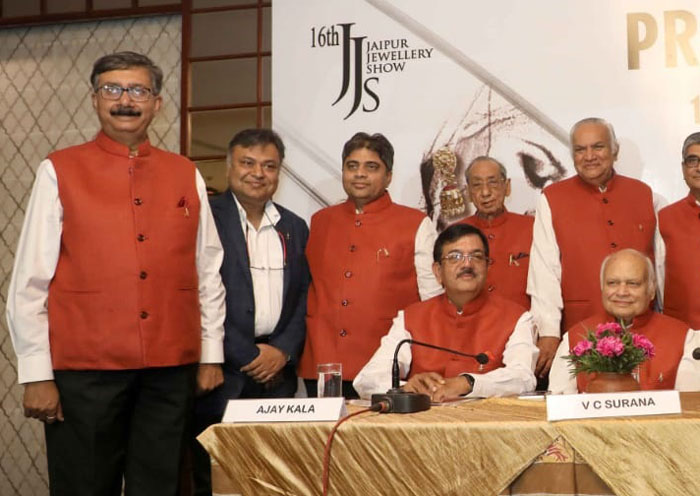 Jaipur: JJS – 2019 (Jaipur Jewellery Show) will be organized at Sitapura-situated Jaipur Exhibition and Convention Centre from December 20 to December 23 this year. The theme of the event will be ‘Inspire to Create Fashion Statement’. The organizers said that the top jewellers from across the country will showcase their latest jewellery designs during the event.

JJS chairman Vimal Chand Surana said that the show has given Jaipur jewellers a platform to promote their creativity on a global scale.

He added that the chief guest of the opening ceremony on December 20 will be MD of Titan Group  C K Venkataraman. Guest of honours will be Pramod Agarwal – chairman of Gems and Jewellery Export Promotional Council and Anantha Padmanabhan – GJC chairman.

JJS secretary Rajeev Jain said that the event was started in 2003 by Rashmikant Durlabhjee with 67 stalls.

“We have come a long way since then as there will be more than 800 booths from domestic and international jewellers during the event this year,” said Jain. About 190 booths will be dedicated to gem stones, while 553 booths will showcase jewellery designs. There will be 62 booths for allied jewellery, costume jewellery and artefacts.

“The growing number of booths indicate that the show is getting popular with each passing year,” said Jain.