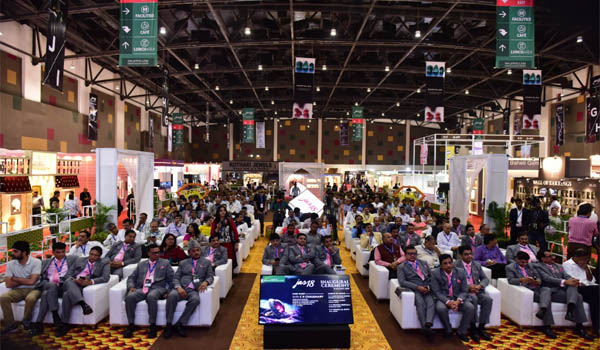 Still from JAS'18 at JECC in Jaipur.

Jaipur: Jaipur will host the 13th edition of jewelry show – JAS’19 – at Jaipur Exhibition Convention Centre (JECC) near Sitapura in Jaipur. The four-day long event will start from April 6 and will conclude on April 9. The theme of this time’s edition is ‘Real is Rare’, said Jewellers association officials.

President of Jewellers association Sanjay Kala said that the first day of the event will be completely dedicated to the traders. The theme of the show is ‘Real is Rare’. It will showcase the power of gems and their real effect. A large number of traders from India and abroad will be part of the event.

The four-day-long show will bring together manufacturers, retailers, designers, artisans, wholesalers, and buyers from across the globe to create a unique business environment. It will offer jewellers an opportunity to have in-depth discussions with India’s best manufacturers and to meet many new suppliers in the gems and jeweller industry.

Secretary D.P Khandelwal said that the show will have 10% more booths as compared to last year’s edition.  The registrations desk and booths are being decorated on traditional and gems themes to attract visitors.

A separate pavilion having 50 booths will be developed for the emerald fans and buyers. Emerald varieties from the countries including Brazil, Russian, Columbian, Euthopia and others will be presented.

Seminars on various topics will be held in the presence of experts during four days of the event. Lucky draw contest will be held where the winner will get jewellery prizes up to Rs 1 Lakh. The award ceremony will also take place at the last of the vent on April 9, in which winners, sponsors, and traders will be awarded.

Last year, the 12th edition of JAS’18 will be held from August 31 to September 3 at Jaipur Exhibition and Convention Centre (JECC) at Sitapura in Jaipur. The theme of the show was ‘Journey from mines to jewellery’