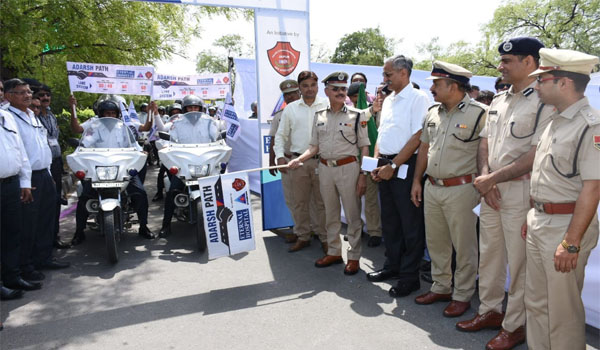 DGP Kapil Garg and other officials while inaugurating 'Adarsh Path' at JLN Jaipur.

The first stretch of ‘Adarsh Path’ that is from Jawahar Circle to Gaurav Tower was inaugurated on Thursday in the presence of DGP Kapil Garg, ADG Traffic PK Singh, Police Commissioner Anand Srivastav and senior police officer.

The ceremony was held at Jawahar circle.

According to the officials, the drivers were made aware of the lane system on the road and rules of Motor vehicle Act. If anyone is found violating the laws, a strict action will be taken.

Several CCTVs have been placed on the first stretch on JLN Marg. Police officers will be able to capture the violation of traffic rules on video. If the violator speeds away, the challan will be sent to his house with video proof, added officials.

DCP Traffic Rahul Prakash said that a total of 29 police officers will be on duty on the first stretch of ‘Adarsh Path’.

Strict action will be taken violating the following laws:

•    The driver and the other person riding pillion should wear helmets.

•    Only two persons will be allowed to ride on a two- wheeler.

•    The vehicle should stop at the red light before the stop line.

•    The person should use the Zebra crossing for crossing the road during the red light.

•    Seat belt mandatory for the car driver and the person on passenger’s seat.

•    Not to cross the speed limit on the road

•    Not to go in the wrong direction of the road

•    Not to jump the vehicle over the divider for a shortcut