The hospital administration has formed a committee to probe the allegations and removed the doctor from critical services; however, the family members demanded a strict action. 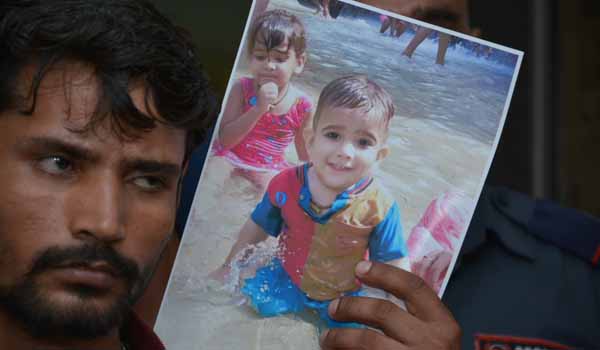 Boy who died during treatment at JK Lon Hospital

Jaipur: An FIR was registered against a doctor of JK Lon Hospital in Jaipur after an infant died allegedly due to negligence. The family members staged a demonstration, manhandling security guards and the staff at the hospital. They alleged that the child was administered a transfusion of blood even when he had shown signs of allergy. When the family members approached the doctor, he was allegedly sleeping in his cabin. He allegedly didn’t come out even after the child was in a critical condition. The hospital administration has formed a committee to probe the allegations and removed the doctor from critical services; however, the family members demanded a strict action. They took out a protest rally and reached the hospital. Some women tried to enter one of wards, so the guards closed the gate. The family members forced it open and manhandled the security guards. The woman then staged a sit-in at the hospital. The mother of the child, Jurdsani, has registered an FIR with Moti Doongari police station. The mother told media persons that his son Mayank who was suffering from Diarrhoea had been rushed to hospital on June 7. The doctors suggested blood transfusion following the child’s father donated blood. After the blood transfusion, the child reported rashes on his body. The transfusion stopped but after the shift of doctors changed, another doctor transfused blood. The family members informed the doctor about the allergy, but the doctor didn’t listen to them. The child’s condition deteriorated and he died on June 8. Hospital superintendent Dr Ashok Gupta said that a committee had been formed to probe the matter. “The doctor has been removed from the critical treatment services. We are waiting for the committee’s report. If he is found negligent, action would be taken against him,” said Dr Gupta.
Follow @ThePinkcityPost